AMD's Radeon RX 7000 series has now been revealed, and their flagship-level Navi 31 graphics cards boast some impressive specifications. That said, AMD's GPU clock speeds were lower than many expected, with AMD's RX 7900 XTX having a Game Clock of 2300 MHz and a boost clock of 2500 MHz.

In a video from PC World, it was said that AMD's Navi 31 silicon was "designed to scale to up to 3 GHz", suggesting that AMD's RDNA 3 graphics cards may have some untapped overclocking potential. With AMD focusing on power efficiency with their latest graphics cards, it looks like Radeon has targeted an optimal part of their GPU's voltage/frequency curve, potentially leaving room for beefy GPU overclocks. However, it is worth noting that these "up to 3 GHz" claims do not come from AMD directly.

With a power target of 355 watts, AMD's Radeon RX 7900 XTX consumes a lot less power than Nvidia's RTX 4090 graphics card, and ASUS has already revealed an RTX 7900 XTX model that has three 8-pin PCIe power inputs, giving the GPU access to 450 watts of power though those connections. Potentially, this power could be used to deliver higher clock speeds and increased gaming performance, though this remains to be seen. 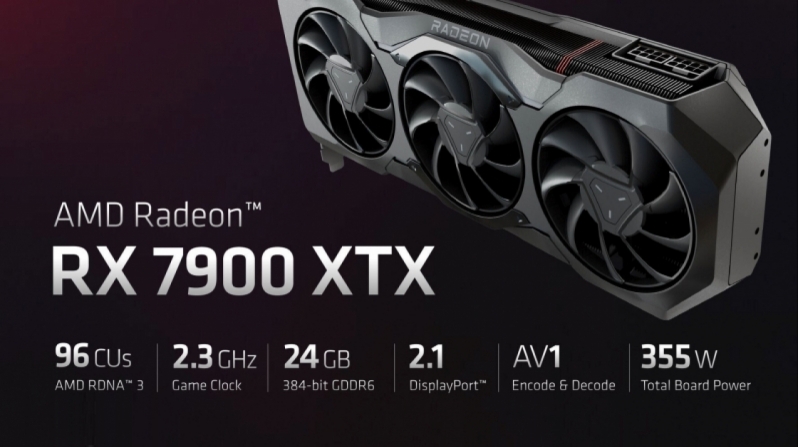 While it would be awesome to see large AIB RX 7900 XTX graphics cards with higher power targets and boosted performance levels, one of the beautiful things about RDNA 3 is AMD's focus on efficiency. A power efficient PC is less power hungry, cooler running and often quieter. That's good for your ears, your energy bills, and your gaming spaces during hot summer months.

Expect more information to be revealed about AMD's RDNA 3 graphics architecture and RX 7900 XT and RX 7900 XTX graphics cards over the next few weeks.

You can join the discussion on AMD's Radeon RX 7900 XTX graphics card on the OC3D Forums.

dazbobaby
A power reduction, no need for a new expensive PSU, and near enough to 4090 performance for £600 less.


Along with HDMI and DP 2.1
This will hurt (we're not selling to bitcoin farmers, lets arbitrarily increase the price) Nvidia

arbitrarily got it right first time and no spell checker!Quote

NeverBackDown
I'm really just mostly excited to do a deep dive on their architecture mostly because I can't afford these lol. It's really interesting to me how they could achieve all this just by doing a Chiplet design (obviously not the only thing) and handling latency.Quote

Warchild
The design of that cooler above trumps ANY Nvidia card I have seen to date.
Sleek, black, 9 blade design, somewhat slim. Id buy it just for the looks

AlienALX
Glad they learned something from the dreadful AM5 launch.Quote
Reply