Over the past year, Steam's hardware surveys have reported a lot of strange results, with increases in Windows 7 usage, increased use of quad-core processors and insane boosts in the use of Simplified Chinese as a language on the platform.

After some investigating, Valve has discovered that the increased popularity of Chinese Cyber Cafes has skewed the results of Steam's hardware survey, overcounting these systems to skew OS, CPU, GPU and language market share results. Thanks to fixes that Valve has implemented in recent weeks, the company's April hardware survey will now produce accurate results, boosting AMD's CPU and GPU market share significantly.

Below is Valve's post which explains the issue in further detail.

The latest Steam Hardware Survey incorporates a number of fixes that address over counting of cyber cafe customers that occurred during the prior seven months.

Historically, the survey used a client-side method to ensure that systems were counted only once per year, in order to provide an accurate picture of the entire Steam user population. It turns out, however, that many cyber cafes manage their hardware in a way that was causing their customers to be over counted.

Around August 2017, we started seeing larger-than-usual movement in certain stats, notably an increase in Windows 7 usage, an increase in quad-core CPU usage, as well as changes in CPU and GPU market share. This period also saw a large increase in the use of Simplified Chinese. All of these coincided with an increase in Steam usage in cyber cafes in Asia, whose customers were being over counted in the survey.

It took us some time to root-cause the problem and deploy a fix, but we are confident that, as of April 2018, the Steam Hardware Survey is no longer over counting users.

As a result of these changes, AMD has seen an increase in CPU market share of 4.6%, with Radeon Graphics seeing a similar boost of 4.1%. These changes showcase how much the Chinese Cyber Cafe market has skewed Valve's market share results in Intel/Nvidia's favour, with Simplified Chinese seeing a usage drop of 21.89% when compared with last month.

With Valve's adjusted hardware survey statistics, the company has found that 53.10% of Steam users run Windows 10 based PCs, with 50.8% of systems having full DirectX 12 support. 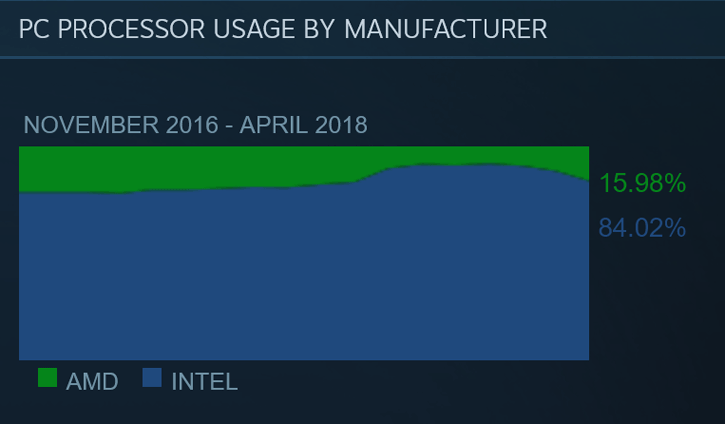 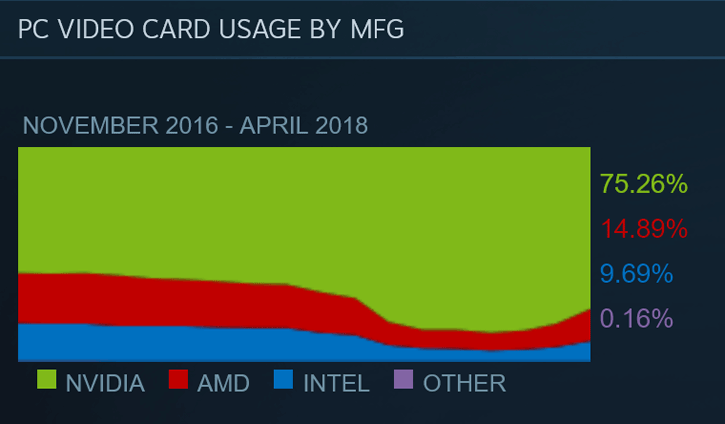 With this fix, Valve has made their Steam hardware survey a much more accurate representation of real-world market shares, with Nvidia and Intel remaining dominant in the GPU and CPU markets respectively. It will be interesting to see if AMD's Ryzen series processors will be able to increase their market share over time.

You can join the discussion on AMD receiving a huge market share boost after Valve increases the accuracy of their Steam Hardware Survey on the OC3D Forums.

AlienALX
Now this is something nice and significant. Good going AMD.Quote

NeverBackDown
Ironically the great site WFFCT whatever the heck they are called just reported on how AMD has gained massively in the April survey and how it's wrong using research.

Didn't even fact check the fact that Steam said they just fixed it and why it was wrong before.