AMD may have the performance crown, but their RX 6500m GPUs lack video encoders

Let's be clear here, AMD's newly released performance numbers are designed to do one thing, showcase technological superiority over Intel within the GPU market. That said, while AMD's RX 6500m appears to slam Intel's ARC A370m into the floor, Intel's GPU has some critical advantages for users.

The RX 6500m has some major drawbacks

Like its desktop counterpart, the Radeon RX 6500m lacks integrated video encoders. This is part of the reason why AMD can build the RX 6500m with such a low transistor count. Yes, AMD appears to win the performance crown here, but if you need to encode video, AMD's RX 6500m will not be a useful product. That said, AMD's RX 6500m GPUs should be paired with CPUs that feature integrated graphics solutions and video encoders.

While the fact that the ARC A370M features video encoders is an advantage for Intel, its support for AV1 encoding is something that all current-generation AMD graphics cards lack. While AMD claims the performance crown below, Intel wins in other areas. 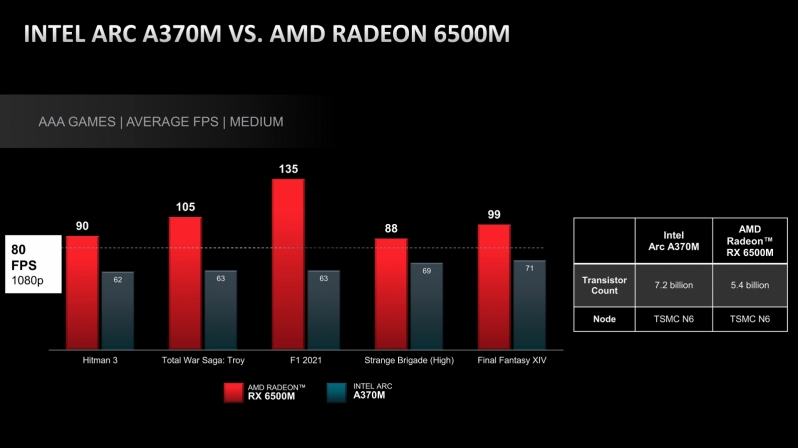 When Intel launched their ARC A-series of mobile graphics cards, Intel did not reveal benchmarks that compared their discrete graphics solutions to currently available AMD and Nvidia products. Today's benchmarks from AMD show us why.

As it stands, it looks like Intel has not won the performance crown within the low-end GPU market. That said, it remains to be seen how Intel's higher-end products will perform.

You can join the discussion on AMD's RX 6500m smashing Intel's new ARC A370m graphics card on the OC3D Forums.