With all-in-one CPU water coolers continuing to grow in popularity the market for large traditional CPU coolers has shrunk considerably, though there still remains a loyal fanbase for premium heatsink designs.

Some PC builders do not like using AIO water coolers as at times their pumps can be loud and if the pump fails your CPU will have no cooling, placing your system in danger if you do not have any safeguards in place. Large heatsinks, on the other hand, do not require a pump and can operate passively with your system's natural airflow should a fan fail, giving their users a little more peace of mind.

Over the past few years, there have been relatively few new premium heatsinks hit the market, with Noctua's NH-D15S currently ruling the roost with its dual tower design. Antec has decided to do one better and create a heatsink with a total of 3 cooling towers.

This heatsink is currently unnamed and has been shown in 3 colour options, a dark Nickel design with an LED on the middle cooling tower, a red design and an exposed copper design. The first two colour options feature traditional Aluminium fins, with the copper design using copper heatfins. This triple tower CPU cooler will be cooled with two Antec Fans, though the option to mount up to 4 fans is available. 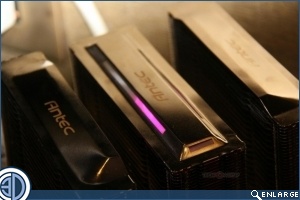 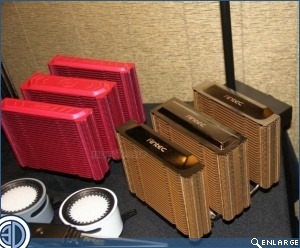 The heatsink measures in at 165mm x 142mmx 159mm and the fans operate at between 800 and 1800 RPM with a noise output of 25.9dBA each. At this time, we do not know when or if Antec plans to release a consumer model of this heatsink to the market.

You can join the discussion on Antec's triple stack CPU heatsink design on the OC3D Forums.

SuB
Jesus, can you imagine dropping your case? That's A LOT of weight on the socket right there.. surely that would give uneven pressure?Quote

Surpuppa
Quote:
Why would you drop your case? When dropping a case I would say that the pressure on the socket is one of the least worrysome problemsQuote

SuB
Quote:
Accidents happen? Even just moving it about with that much hanging off the socket would make me nervous..Quote

Wraith
Quote:
When I first saw the Thors Hammer cooler I thought precisely the same thing. It's cringe worthy as hell.. also with CPUs getting ever more energy efficient and lower TDP what's with all the monster coolers.Quote