While 15% performance gains may not seem like much, ARM has promised larger performance gains elsewhere. With the Immortalis-G715, ARM has stated that they have delivered a 2x boost in machine learning (ML) performance, performance gains that will accelerate a large number of workloads. Additionally, ARM's latest graphics chips also support matrix multiply instruction support, and ARM intends to deliver broader developer support to optimise the performance and efficiency of mobile games and applications. 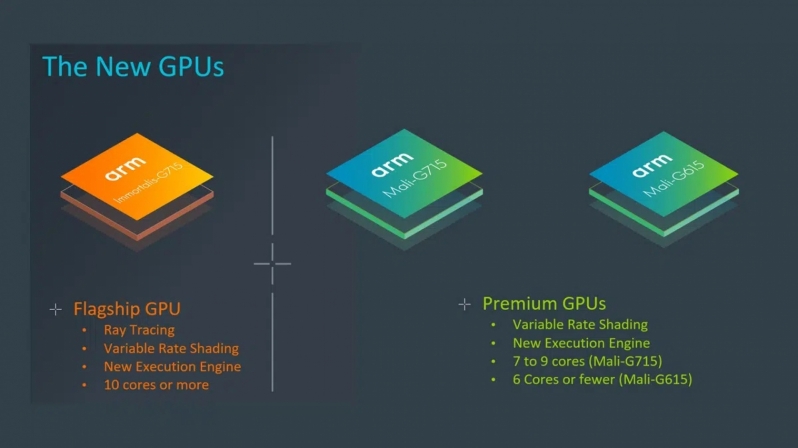 Feature-wise, the headline feature of the Immortalis-G715 is its support for hardware accelerated ray tracing (RT), which promises users a 300% performance gain over software ray tracing support. While hardware RT may sound unnecessary for mobile-focused chips, ARM has noted that their hardware RT implementation takes up less than 4 percent of their GPU shader core area. For a 300% performance gain, that's a small die area to utilise.

Alongside support for hardware accelerated RT, ARM's new Immortalis-G715 GPU can support configuration of 10 or more GPU cores and features support for variable rate shading. ARM is allowing their partners to create larger mobile GPUs, and has given these GPUs access to much of the next-generation gaming feature set. Hardware accelerated ray tracing and variable rate shading are vital parts of Microsoft's DirectX 12 Ultimate API, and seeing these features appear within the mobile gaming market should help to boost the adoption of these features elsewhere. 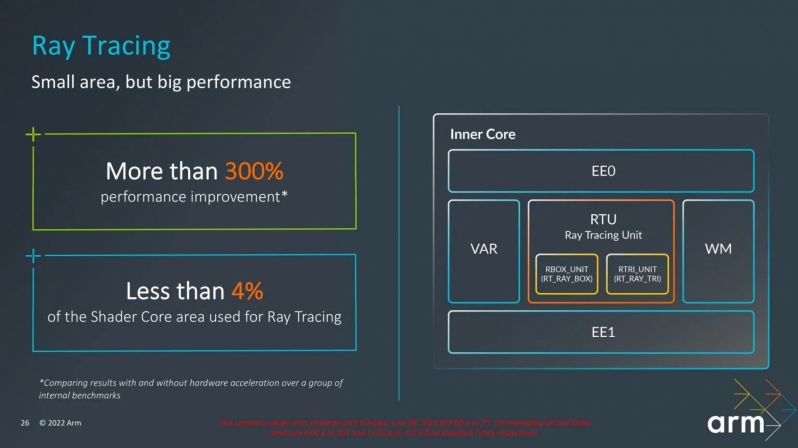 ARM has also revealed their new Mali-G715 and Mali-G615 GPUs, which also support variable rate shading. With variable rate shading, ARM has claimed that they can achieve up to 40% performance improvements in gaming content, which is a big deal for mobile devices with limited battery life. Variable rate shading can be seen in two ways, as a performance booster, or as a power saving feature that could enable the same performance as non-VRS but with a much lower power draw. Either way, VRS is a great addition to mobile GPUs.

Epic Games has promised support for ARM's Immortalis feature set with Unreal Engine and Unity also plans to support Immortalis with their own game engine. MediaTek has also laid out plans to create SOCs with Immortalis GPUs. This level of industry support is expected for all modern ARM GPUs, as ARM's chip designs will inevitable make their way to a large number of mobile devices and SOCs. What remains to be seen is if mobile developers will adopt VRS and ray tracing foe their future games and apps.

You can join the discussion on ARM bringing ray tracing to mobile with their Immortalis-G715 GPU on the OC3D Forums.

NeverBackDown
Would have liked to have seen higher performance improvements outside of these new features. It's one area ARM is lacking compared to Apples M seriesQuote
Reply