This screen is 6x faster than standard 60Hz screens

At CES 2020, ASUS revealed the world's first 360Hz monitor, a screen designed for eSports users which utilised a fast-IPS panel, a G-Sync Module and support for DisplayPort 1.4.

Meet the ROG Swift 360Hz PG259QN, ASUS' 360Hz monitor in its final form. For competitive gamers, faster refresh rates are game changing. Not only can they improve in-game motion clarity, but their reduced latency gives gamers precious time where milliseconds can spell the difference between victory and defeat.

With high refresh rate monitors, gamers can react faster and benefit from increased motion clarity. ASUS' ROG Swift 360Hz PG259QN also boasts support for HDR10, though at this time it is unknown how robust this screen's HDR support is.

Thanks to Nvidia's latest G-Sync processor, ASUS can provide gamers with industry-leading refresh rates and tear-free gaming, though it is worth noting that this screen features a "large custom heatsink" to keep this high-speed display controller cool during its operation.

For connectivity, ASUS' ROG Swift 360Hz PG259QN features both DisplayPort 1.4 and HDMI 2.0 inputs alongside dual USB 3.0 ports and a headphone connection. HDMI 2.0 connections are limited to 240Hz, due to the bandwidth limitations of HDMI 2.0.

Citing a study from Nvidia, ASUS claims that 360Hz monitors can allow gamers to perform better in games and achieve higher K/D ratios in competitive shooters like Counter-Strike: Global Offensive and MOBAs like DOTA 2.

At this time, the exact release date and pricing of ASUS' ROG Swift 360Hz PG259QN remain unknown. These details will be announced at a later date.

You can join the discussion on ASUS' ROG Swift 360Hz PG259QN Gaming monitor on the OC3D Forums. 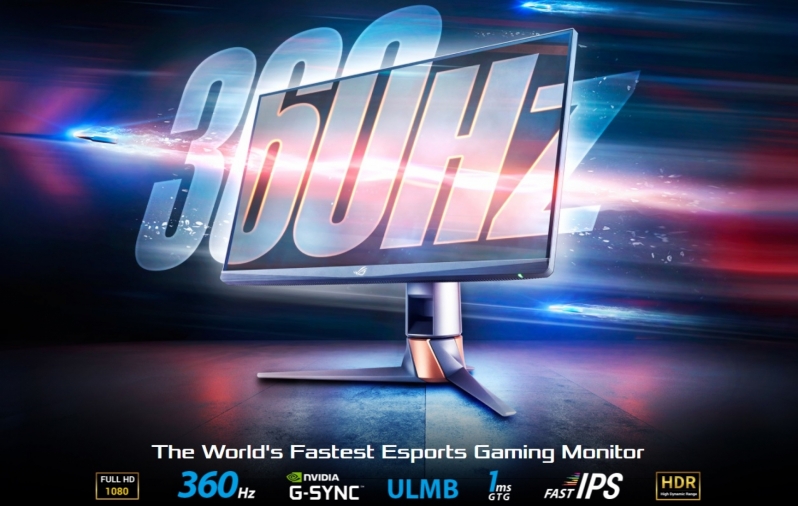 I love my frames being high but scaling back to that size screen just doesnt work for me. At least its a start to something better I suppose.Quote
Reply