On January 27th, Nvidia will be launching their RTX 3050, and ASUS is ready for this launch with three new graphics card, delivering the RTX 3050 in ROG Strix, Dual and Phoenix flavours.

If you buying an ASUS RTX 3050, the question you need to ask yourself is how overkill do you want your GPU's heatsink to be? Do you want a single-fan RTX 3050 Phoenix, and Dual-fan RTX 3050 Dual or an insane triple-fan RTX 3050 Strix? All three of these graphics cards feature a 8GB frame buffer and support Nvidia's full RTX feature set, which includes DLSS, hardware accelerated ray tracing and full DirectX 12 Ultimate support.

All three of these new ASUS graphics cards are built using ASUS' Auto-Extreme assembly technology, a collection of manufacturing techniques that allows all of ASUS' RTX 3050 lineup to have its components picked, placed and soldered without any human interaction, ensuring maximum precision and reliability. There can be no human errors when these GPUs are machine built.

Sadly, ASUS has not revealed the retail pricing of these graphics cards, but Nvidia has confirmed that their RTX 3050 will be available with prices starting at $249 in the US. What follows is ASUS' RTX 3050 Press Release. 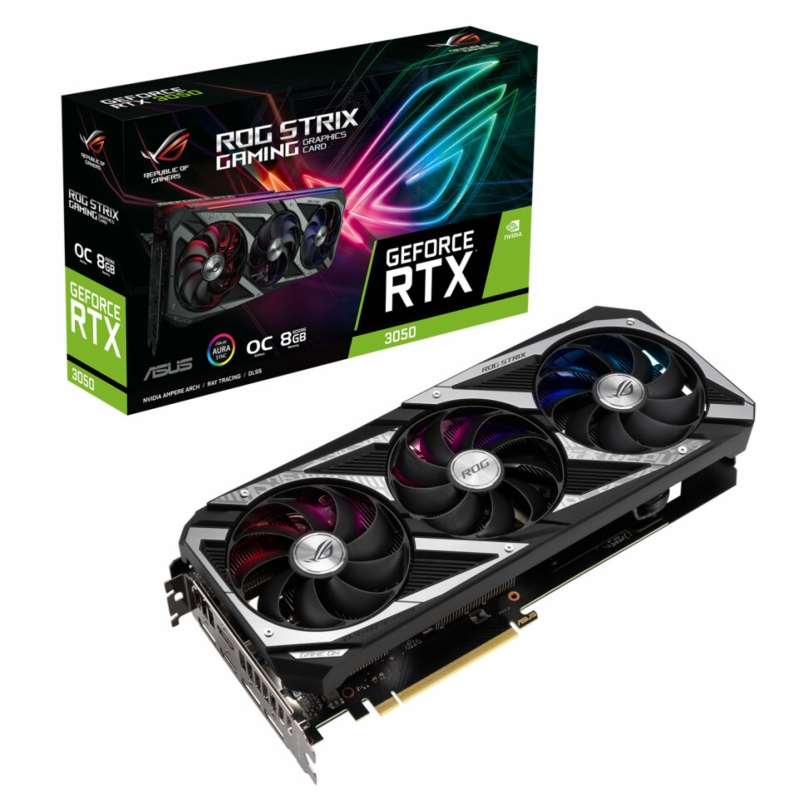 Built on the DNA of the NVIDIA Ampere architecture stablemates, the ROG Strix GeForce RTX 3050 8GB delivers potent gaming performance, cool temperatures, and whisper-quiet noise level. Chiseled cutouts, angular lines, and metallic accents lend the shroud an air of mastery, while an addressable RGB LED ROG logo on the backplate and a full-length light strip lets users coordinate the look of their build through Aura Sync.

The shroud includes a 2.7-slot heatsink built to wick heat away from the GPU's hotspots through a baseplate finished with via the MaxContact process. This finish improves contact with the GPU chip itself, increasing heat transfer into the heatpipes and fin stack above. The baseplate also covers the card's GDDR6 memory modules to keep them running at optimal temperatures.

A trio of nine-blade Axial-tech fans keep a steady stream of cooling air moving through the high-surface-area fin stack so that the GPU can sustain its highest level of performance throughout a gaming session. To minimize turbulence and focus the air stream on the heat-producing components, the side fans spin counterclockwise. The vented backplate offers a key assist in the cooling process by allowing hot air from the heatsink to more easily enter a case's natural airflow path, and a pair of FanConnect II headers lets users dedicate case fans to the control of the GPU so that they get the cooling performance they need while gaming. When the graphics card is idle or under light loads, its fans can drop into 0 dB mode for silent operation.

ROG Strix GeForce RTX 3050 is built from the ground up to maintain a high level of performance over the long term. Extra-durable SAP II capacitors are ready to stand up to heavy loads in tandem with premium chokes and MOSFETs. The Auto-Extreme assembly technology—used across the ASUS GeForce RTX 3050 lineup—picks, places and solders each component to the card's PCB without any human interaction for maximum precision and reliability. 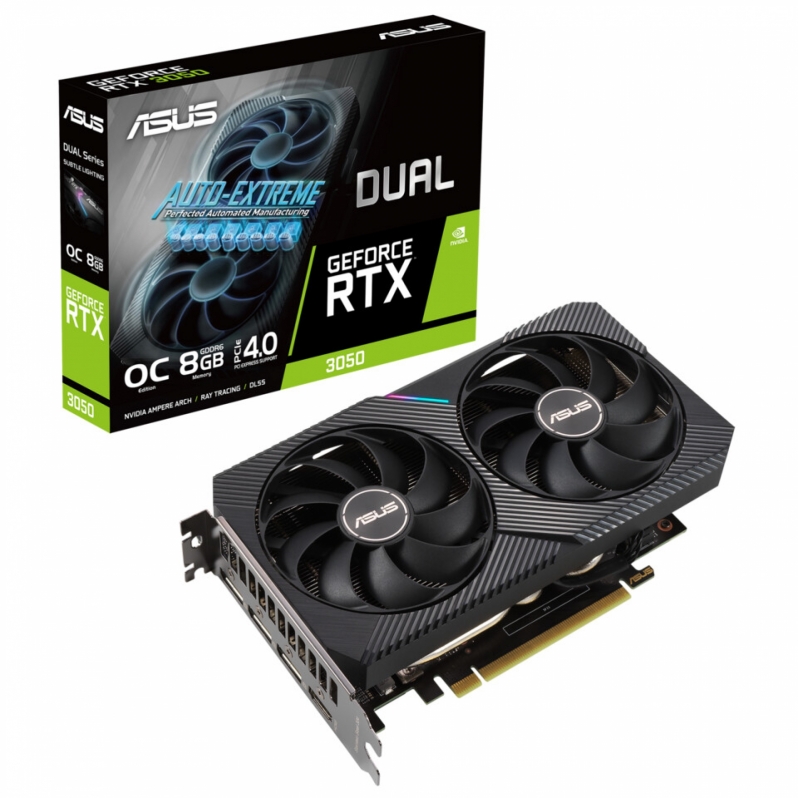 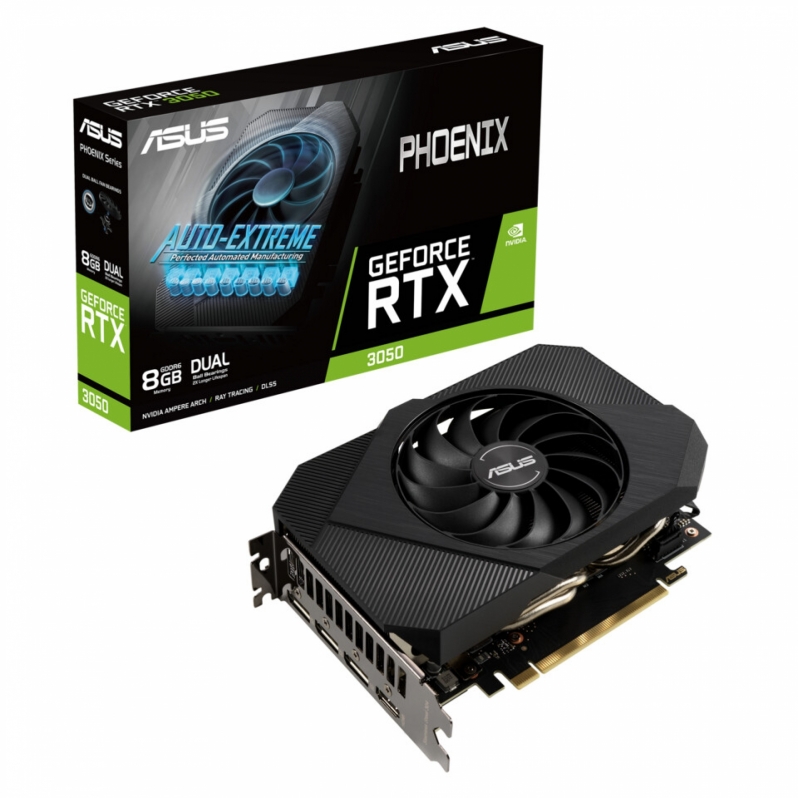 Dual GeForce RTX 3050 8GB harnesses a pair of fans with the proven ASUS Axial-tech design to maintain airflow on a dense array of heatpipes and fins. 0 dB lets those fans drop down into silent operation when loads and temperatures permit. Subtle lighting cues and a minimalist design make this graphics card an unobtrusive addition to any build.

For something even more tightly packed, ASUS Phoenix GeForce RTX 3050 8GB offers the power of NVIDIA Ampere architecture as a great fit for machines of all sizes. Armed with a sturdy aluminium backplate and an Axial-tech fan, this graphics card offers the gaming and cooling performance that users demand in a slim, stout package.

As with ROG Strix GeForce RTX 3050 8GB, the ASUS Dual and ASUS Phoenix cards are equipped with the ASUS Auto-Extreme assembly technology to ensure long-term reliability. A special protective conformal coating on the PCBs of the Phoenix cards goes a step further by protecting them against any potential short-circuits caused by moisture, dust, and debris. ASUS also subjects these graphics cards to a grueling 144-hour validation process to ensure that each one is built to go the distance.

You can join the discussion on ASUS' RTX 3050 Strix, Dual and Phoenix models on the OC3D Forums.