ASUS' ROG Strix RTX 3090 LC and TUF Gaming RTX 3090 Ti are available starting today at retailers across the globe. The RTX 3090 Ti TUF Gaming is available with OC and Non-OC models. Below is ASUS' Press Release for their RTX 3090 Ti series graphics cards. 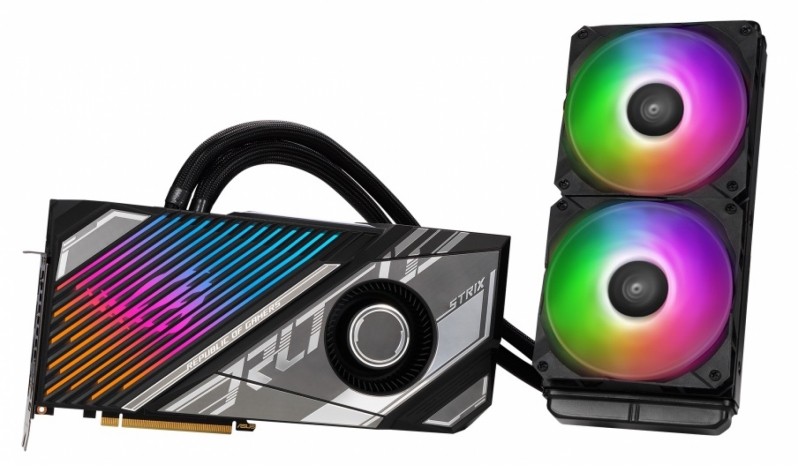 ASUS today announced the ROG Strix LC GeForce RTX 3090 Ti OC and TUF Gaming GeForce RTX 3090 Ti OC graphics cards. Engineered for the most demanding gamers, content creators, and data scientists, the GeForce RTX 3090 Ti features a record-breaking 10,752 CUDA cores along with 78 RT TFLOPs, 40 Shader TFLOPs, and 320 Tensor TFLOPs of performance. It is also equipped with 24GB of the fastest 21Gbps GDDR6X memory that offers 1TB/s of memory bandwidth. Both ASUS cards leverage a variety of upgrades and exclusive features to get the most out of this groundbreaking GPU.

ROG Strix LC GeForce RTX 3090 Ti features a closed-loop liquid-cooling system that keeps temperatures and noise levels under control. It starts with a custom-designed radiator plate that spans the GPU die and onboard GDDR6X memory. This ensures best-in-class cooling for the highest-performing components. The 560mm hoses give users flexible options for installing the cooler, even in larger cases or in builds that also include an AIO CPU cooler. The 240mm radiator is cooled by dual 120mm ARGB fans tuned to move large volumes of cool air with high static pressure. A blower-design fan and low-profile heatsink under the cover dissipate heat generated by the power supply components,

A range of features make this graphics card easy to install and set up for long-term performance. A circuit that monitors the power supply warns the user with a static LED if the card is not connected to the power supply via the 1×16-pin power connector. The same LED lights up when the graphics card is not receiving enough power. Two FanConnect II headers allow case fans to be connected directly to the graphics card to increase airflow when the GPU is under load. A dual-mode BIOS switch offers the choice between the highest cooling performance and the highest clock speeds, or quieter operation with a slight performance penalty. Finally, 0dB technology allows
The ROG Strix LC GeForce RTX 3090 Ti graphics card is made for a showcase build. Angular text and parallel lines adorn the body of the card. The addressable RGB LEDs on the cooler's cover and fans bring a vibrant glow to the interior of the case, and Aura Sync allows users to easily coordinate the lighting effects with the rest of their Aura-compatible gear. 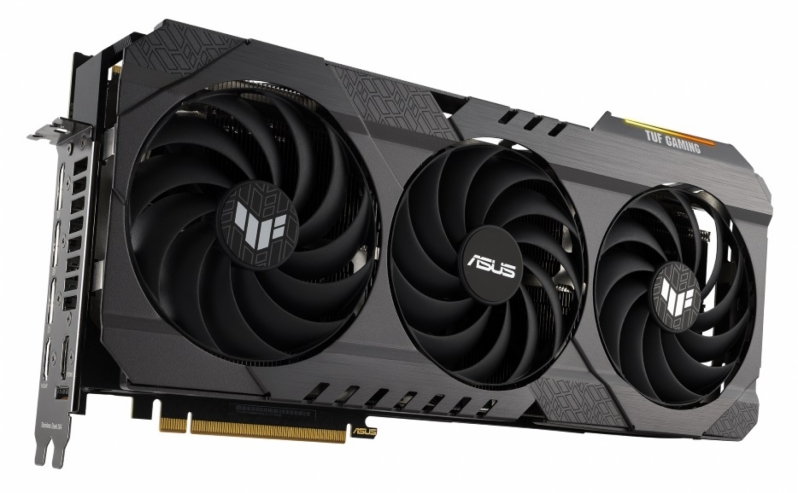 It starts with an angular matte black metal cover with rugged industrial design elements. It covers a massive 3.2-slot heatsink that keeps the GPU, VRAM, and power supply circuits cool even under demanding loads.
Three Axial-Tech fans ensure high airflow on the large-area heat sink. ASUS increased the height of each fan to 1.5 cm to increase static pressure, and all three fans have a half-width shroud that directs air exactly where it's needed. The central fan spins clockwise, while the two on the flanks spin counter-clockwise to reduce turbulence. This proven design allows for higher RPMs and more airflow through the heatsink without increasing noise. A special memory heat sink keeps the massive GDDR6X memory cool and thus ensures reliably high performance. A 0dB fan stop mode allows the card to operate quietly at light loads or when idling.

The TUF Gaming GeForce RTX 3090 Ti graphics card also offers many detailed solutions for enthusiasts that improve the capabilities of the system. Auto-Extreme assembly technology, used across the ASUS lineup, places and solders components with precision and without human intervention to increase component reliability and quality. A 144-hour testing process and military-grade capacitors ensure reliability and long life. With the integrated Aura RGB LEDs, users can match their TUF gaming card to the rest of their system.

Part of their winning formula that establishes a new class of performance, these GeForce RTX 3090 Ti graphics cards require more power than their predecessors. To get the most out of them, ASUS recommends a power supply rated at 1,000 watts or more, depending on the specifications of the entire PC system. The power supplies of the ROG Strix and ROG Thor families are already prepared for the demands of these cards thanks to their high-quality components, massive internal heatsinks and the ASUS-exclusive Axial-Tech fan design.

You can join the discussion on ASUS' new RTX 3090 Ti series graphics cards on the OC3D Forums.

Dawelio
I actually preferred the TUF design on the 3000 series cards. But EVGA's new updated aestethics, removing the red accents etc and just a complete blackout look with grey accents, they have absolutely won the design award in my opinion.Quote
Reply