When AMD revealed their Radeon RX 6500 XT, the company revealed an MSRP price of $199 for the US. With this pricing level, AMD's Radeon RX 6500 XT has the potential to revitalise the low-end GPU market, an area of the GPU market that is in dire need of support.

On their DE (German) Press website, ASUS confirmed that their RX 6500 XT Dual and RX 6500 XT TUF series graphics cards would cost €299 and €334 in Germany respectively. This is much higher than AMD's intended MSRP for their RX 6500 XT, even after VAT is considered.

If we used one word to describe this news, that word would be disappointment. The world needs cheaper graphics cards, and PC gamers need a budget-friendly option. As it stands, Microsoft's Xbox Series S costs less than AMD's RX 6500 XT, and it is a full gaming system. When looking at these prices for AMD's RX 6500 XT, it is hard not to consider looking towards consoles.

To achieve AMD's low pricing, AMD's Radeon RX 6500 XT design makes a few compromises. Video encoding is dropped, the graphics card has less than 8 GB of GDDR6 memory, and the graphics card has support only two display outputs. These factors target the RX 6500 XT at gamers (not Ethereum miners) and lowers the material and silicon cost of the graphics card. Even with these changes, it looks like retail pricing will be nowhere near AMD's MSRP pricing.

Like all other RX 6000 series GPUs, the RX 6500 XT supports features like Smart Access Memory, Variable Rate Shading, DXR hardware accelerated Ray Tracing. Sadly, ASUS has not revealed the retail pricing of their RX 6500 XT graphics cards, but the good news for gamers is that the GPU's 4 GB frame buffer makes the graphics car useless for Ethereum mining. 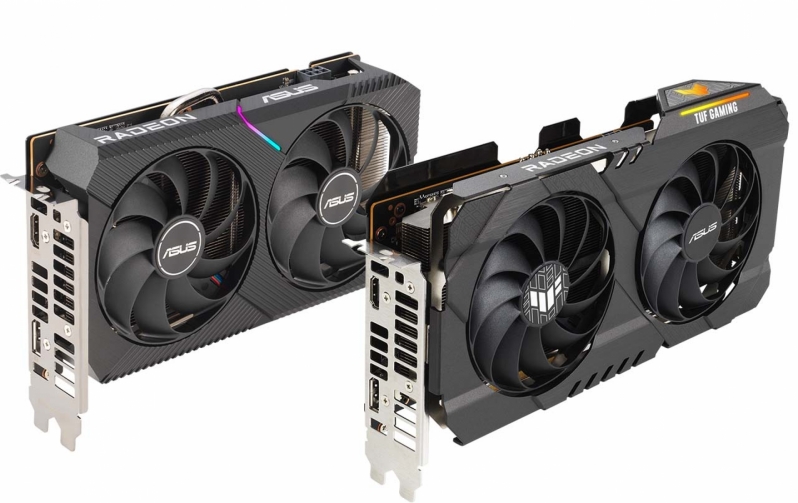 With a 4 GB frame buffer and retail pricing that will likely be much higher than AMD's MSRP for many models, it looks like the Radeon RX 6500 XT is unlikely to be the low-end GPU market saviour that many of us are wishing for. As it stands, the PC gaming market's affordability crisis isn't due to end anytime soon, and that is bad news for all PC gamers.

The current state of the GPU market is sickening, and consumers are sick of seeing MSRP and "real" GPU pricing diverge to such an insane degree. Yes, AMD/Nvidia's MSRP pricing was always designed to be their "minimum" graphics card prices, but consumers should at least expect lower-end models to be at, or close to, AMD's official MSRP. Remember, neither of these graphics cards are ROG Strix models, TUF Gaming and Dual are supposed to be ASUS' more budget-friendly brands.

You can join the discussion on ASUS' official European MSRP prices for their Radeon RX 6500 XT Dual and TUF Gaming series graphics cards on the OC3D Forums.

g0ggles1994
Nice wedge of ASUS tax; purely because they know no matter how much they add, people will buy them.Quote

Warchild
Quote:
Unfortunately, there are so many weak willed people today, that this is not limited to ASUS. Pretty much any PC hardware manufacturer can do the same, and the availability factor trumps performance, price, and value greatly.Quote

AlienALX
Quote:
I don't think it's Asus tax. I think that is going to be the RRP no matter how much you dislike it.


Quote:
I think most of it is simply down to popularity. PC gaming is so popular now that companies know they can over charge. If I rewind back 10 years when every one hated PC gaming and was using an Xbox 360? parts were cheap. Games were half the RRP of console games and you didn't have to pay a monthly sub to play them online.

Now? games are the same or more. Even though they pay 0 in license fees. As I say, with popularity comes greed and prices surge.

I wouldn't even say this will be down to weak will. This is the cost of entry. IE, this is the card you need to be an entry level PC gamer. Without it you are a bit screwed really.

That said I hope it teaches every one at each end of the spectrum a lesson. You're all getting scalped no matter who you are.Quote

dazbobaby
We desperately need intel and the Chinese to hurry up and compete, at least entry and mid-level cards should drop in price.Quote

AlienALX
Quote:
That isn't going to happen. It would have, had the U.S govt not forced AMD to stop providing them with tech, but since then? they have no chance. There are Chinese GPUs already, they are absolutely terrible. They're made for military stuff though, so the chances you could game on it any way are practically 0.

Your saviour, should you decide to accept it, is Intel. Cross your fingers, toes, legs and anything else you can find and pray.Quote
Reply