At this time, we do not have access to the UK pricing for ASUS' new RTX 3080 12GB series graphics cards. However, we do have access to ASUS' planned EU pricing thanks to ASUS DE's (Germany's) press portal. 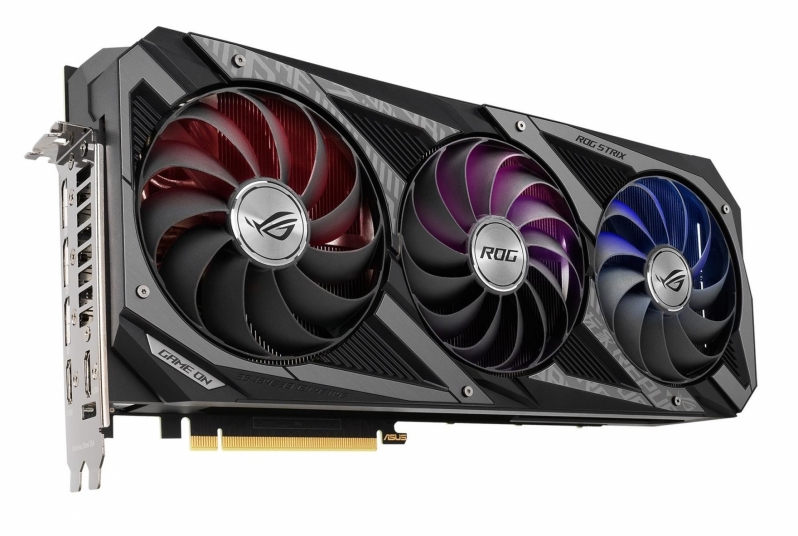 ASUS today announced ROG Strix and TUF Gaming GeForce RTX 3080 12GB graphics cards that feature 2 GB more VRAM than their predecessors. The NVIDIA GeForce RTX 30-series graphics cards from ROG and TUF Gaming are already some of the most coveted PC DIY components on the market, and these new additions raise the bar with additional VRAM. For the best 4K gaming experience today — and peace of mind tomorrow as VRAM requirements for games trend upward — these are the best GeForce RTX 3080 cards for any build.

The latest refinements and innovations in air cooling set the ROG Strix GeForce RTX 3080 12GB apart from the competition. Like the previous model, this graphics card features a massive 2.9-slot heatsink cloaked in an angular shroud with a full-length addressable RGB LED array on the left edge. A cooling cutout on the robust full-length metallic backplate helps dissipate heat into the case’s natural airflow path.

Three Axial-tech fans arranged in a counter-rotating pattern deliver a steady stream of air through the high-surface-area fin stack. With their higher blade counts, these fans offer both increased static pressure and airflow, all the while maintaining whisper-quiet operation. The outer fans use notched barrier rings to manage turbulence, and the central fan has a solid barrier ring to ensure direct airflow to the hottest parts of the heatsink. For unobtrusive day-to-day operation at idle or light loads, the fans drop into 0 dB mode. FanConnect II headers let the case fans deliver a blast of cool air right when it's needed.

NVIDIA Ampere architecture offers massive generation-on-generation performance improvements, and one component of that boost comes from increased power draw. The redesigned ROG Strix heatsink and PCB enable the card to support that improved performance with large amounts of raw electrical power. To maximize overclocking headroom and system stability, three eight-pin PCI Express® power connectors draw current directly from the PSU for less stress on the motherboard, and a high-resolution transient-sensing circuit monitors that flow of power for dips that can negatively impact system stability. 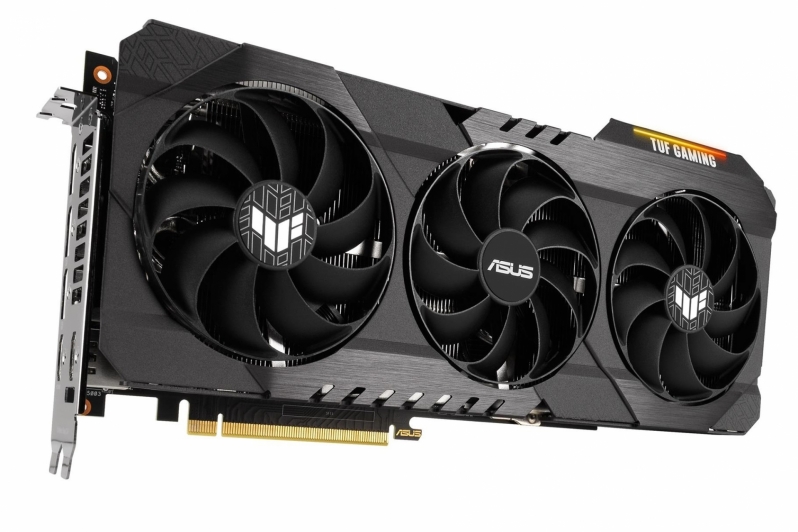 The new TUF Gaming GeForce RTX 3080 12GB is more suited to those looking for an understated yet high-performance graphics card for their next DIY PC build. The blacked-out, brushed-aluminum cooling shroud atop this potent card gives it a confident, stripped-down style that coordinates easily with a wide range of components — especially gear in the TUF Gaming Alliance.

That shroud houses a trio of Axial-tech fans and sits on top of a thick 2.7-slot heatsink. As with the fans on the ROG Strix card, these fans can drop down into a 0 dB mode at idle for silent operation. A cooling cutout in the full-length aluminum backplate helps heat flow into the case’s natural airflow path. For a dash of style, there’s an Aura RGB LED accent on the card that can be synced with other Aura Sync devices.

Like the original TUF Gaming GeForce RTX 3080 card, the new higher-memory variant is built inside and out for reliable performance. Auto-Extreme assembly technology, used for both TUF Gaming and ROG Strix cards, precisely places and solders components to boost reliability and build quality — all without human intervention. In addition, long-life, extra-sturdy capacitors in the power-delivery subsystem can withstand grueling conditions, and a 144-hour testing regime at the factory ensures that each card is ready to perform.

You can join the discussion on ASUS' RTX 3080 12GB graphics cards on the OC3D Forums.