A 1080p IPS screen which boasts a 240Hz support, a built-in DAC and a built-in battery.

Every office worker should know the benefits of a multi-monitor setup, and hardcore gamers will know the benefits of having a portable gaming-ready monitor. With their ROG Strix XG17AHPE, ASUS delivered gamers a 240Hz IPS screen with Adaptive-Sync support and both USB-C and Micro-HDMI input support. Now, ASUS is taking this screen to new heights, literally.

Today, ASUS has confirmed to us that these new displays are now available in the US and UK, though retail stock appears to be limited in the UK at this time. ASUS has revealed a higher-end variant of its ROG Strix XG17AHPE, a new model which comes with additional accessories and features which will elevate the screen's user experience to another level. This new screen is the ROG Strix XG17AHP, a screen which offers users the same feature set as its lower-end counterpart with the addition of a ROG carry case and a tripod mount.  Why is the tripod so important? This tripod allows the Strix XG17AHP to act like a normal monitor. You can use it with your laptop to add an extra screen above your notebook, orient the screen to sit at a comfortable angle or otherwise locate the screen at an optimal location. The folding stand of the XG17AHPE, which the XG17AHP also ships with, limits ASUS' screen to specific screen orientations, a factor which makes the screen less versatile for mobile gaming and workstation uses. Add in ASUS' ROG carry bag, and the XG17AHP is a much better portable monitor for end users.
Both of ASUS' XG17 portable monitors feature support for VESA Adaptive Sync, deliver 240Hz refresh rates over an IPS screen and full HD capabilities. The screen is powered by USB-C and Micro HDMI 2.0 inputs and contains a 7800mAh battery for mobile play. This battery promises three hours of usage at 240Hz without charging, or it can be used to charge other devices if necessary.
As we have stated before, the screen uses IPS technology, offering users up to 178-degree horizontal and vertical viewing angles, alongside a fast 3ms grey-to-grey response time. The monitor also provides 100% sRGB coverage, and stereo 1W speakers wand a built-in ESS 9118 digital-to-analogue converter (DAC) to drive your favourite set of headphones.

This screen can be used to create a dual-screen screen setup with a 17-inch laptop, offer high-end screen performance with modern consoles and smartphones on the go or act as a lightweight monitor for LAN parties. The ROG Strix XG17AHP is also around 1cm thick and weighs around a kilo, which isn't much for a display of this size. 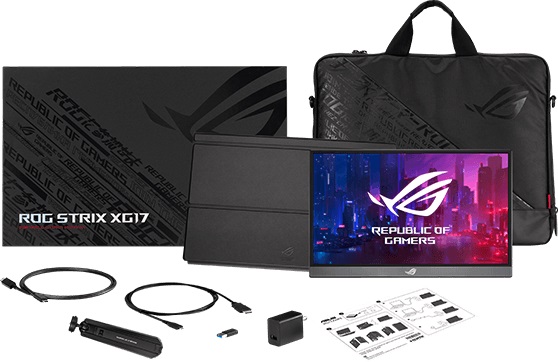 You can join the discussion on ASUS' ROG Strix XG17 series of 240Hz portable gaming monitors on the OC3D Forums.