UK shipments are increasing this month

Both ASUS UK and ROG UK have issued a joint statement on their social media channels, to update gamers on the UK's supply of RTX 30 series graphics cards.

"The demands for these new 30 series graphics cards are causing frustration for a lot of you," ASUS begins, stating that they are "trying our hardest" to get RTX 30 series products into the hands of gamers as quickly as possible.

In the UK, ASUS has confirmed that shipments for RTX 30 series products will increase this month and that these shipments will be distributed to retailers as soon as possible.

Below is ASUS' statement regarding stocks of Geforce RTX 30 series graphics cards. 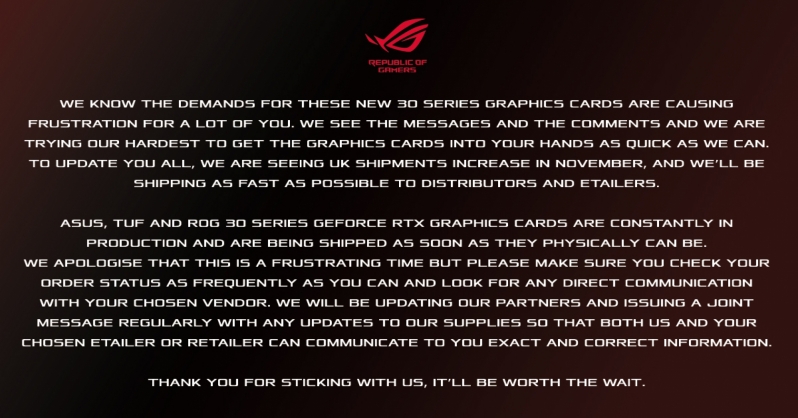 At launch, Nvidia and their board partners failed to meet the high consumer demand for the new series. Over time, retailers have been receiving more regular GPU shipments, though it remains challenging for consumers to purchase RTX 30 series products at retailers.

You can join the discussion on ASUS/ROG releasing a statement regarding the UK's supply of RTX 30 series products on the OC3D Forums. 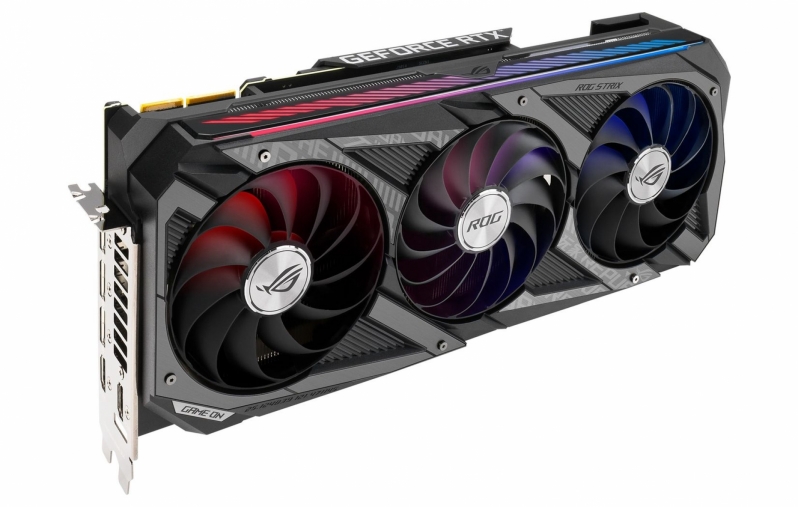 Dippin-in
TBH my eagerness to buy next gen Gcard has waned so I can wait till the new year.Quote

AngryGoldfish
Quote:
It depends on too many factors I think.

If you're happy with the 3080's performance and price, the 3080 will be an excellent card. If the product is what you're looking for, why wait for anything else? Nvidia generally make incredible products that perform as they should. They have a wide array of software features, some of which are essential for some, and hardware support for advanced graphics like DLSS and ray-tracing. I struggled to recommend anyone buy a Turing GPU because they were all so expensive, but the 3080 is a good product.

But if you've waited this long already, why not wait another few weeks? If you missed the boat on the 3080 and feel like you want something with more VRAM and more scaleability, why not wait a little longer? Radeon should have comparable products and be very competitive. For many, they'll offer a genuine alternative for the majority of gamers out there. It's a safe bet to wait. With all that has been shown so far, RDNA2 is not going to be a repeat of Fiji or Vega. And it will offer enthusiast-grade parts, unlike RDNA1 and Polaris.Quote

AlienALX
Three days and you will know for sure.Quote