Is this the gaming monitor of your dreams?

Back at CES 2022, ASUS revealed two ROG monitors that promised to deliver everything that a gamer could possibly want, an 4K OLED display panel, variable refresh rates beyond 120Hz, and both HDMI 2.1 and DisplayPort 1.4 inputs.

Today, at their #ROGAPEX event, ASUS' ROG UK team showcased their ROG PG42UQ OLED gaming monitor running with an Xbox Series X console. This showcase proves that this monitor is getting close to launch. A larger 48-inch version of this OLED monitor is also in the works, offering gamers an even larger screen size should they desire it.

With ASUS's new ROG OLED gaming monitors, ASUS has not simply splashed an ROG logo on an existing LG OLED display. The techno-boffins at ROG have taken things to a new level by using a custom OLED heatsink design that promises to reduce the thermals of their screens (and increase OLED longevity), and have utilised a anti-glare micro-texture coating to reduce distracting glares (a common problem on many large screen TVs).

On their screen ASUS is pushing the fact that their OLED screens can offer users a 0.1ms response time, refresh rates of up to 138Hz over DisplayPort 1.4 and HDMI 2.1, and support for an 98% coverage of the DCI-P3 colour gamut with 10-bot colour and a Delta E of under 2. This screen is designed for high refresh rate HDR gaming at 4K. 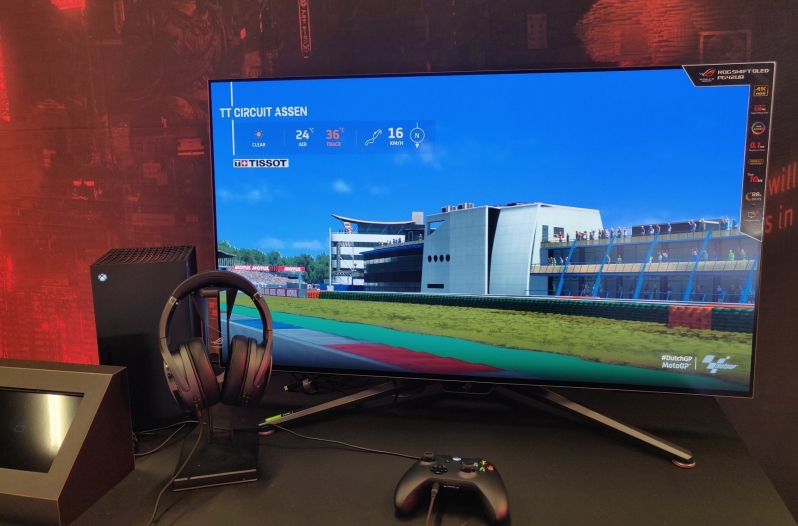 Sadly, ASUS has not revealed the UK release date or pricing for their 4K OLED gaming monitors. We expect to hear more from ASUS over the next few weeks and months.

You can join the discussion on ASUS' ROG PG42UQ showcase on the OC3D Forums.


I can finally see what all the fuss is about high FPS games.Quote

NeverBackDown
It's using the LG 42" panel going to assume here. Depending on price might be better off with that TVQuote

King Mustard
The 42" LG C2 is glossy. Looks much better.Quote

Avet
Quote:
That depends. Gaming monitors have monitor features and DisplayPort. TVs don't. TVs also have auto dimming feature. It is uber annoying. I hope ASUS removes it from this monitor.Quote
Reply