Hardware accelerated AV1 encoding support will allow Intel ARC GPU users to quickly encode AV1 video, which is great news for streamers and other video content creators. AV1 is an incredibly efficient compression format that can deliver higher quality results than H.264 and H.265 encoding when encoding at the same bitrate. For streamers, this allows higher quality video streams to be delivered to viewers, and for video makers, hardware accelerated AV1 encoding will dramatically speed up the encoding of AV1 video projects. 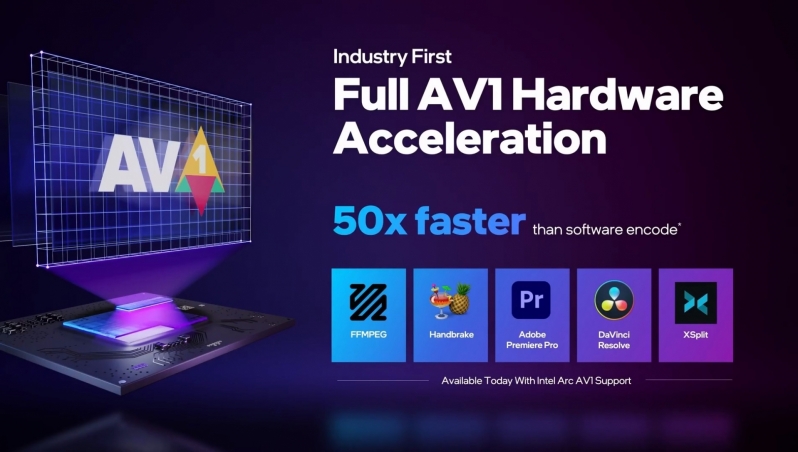 Before today, Nvidia graphics cards were in high demand from streamers and video content creators for their NVENC encoding capabilities. With their support of AV1 hardware accelerated video encoding, Intel has hit Nvidia hard. Nvidia will not support AV1 encoding until the launch of their RTX 40 series graphics cards, and that assumes that AV1 hardware encoding support is planned for those products.

With their ARC A-Series, Intel is targeting Nvidia and its control of the "creator" segment of the discrete GPU market. This is great news for content creators, as this given users within this market more hardware options and will force Nvidia to work harder to for their hardware sales in the future.

You can join the discussion on Intel becoming the first GPU manufacturer to support AV1 video encoding support on the OC3D Forums.

AlienALX
Proper. Their RT stuff is supposed to be proper too.Quote

dazbobaby
Supported in hardware doesn't mean much to me. I've used H.265 for years with various hardware, and even on today's PC's, it's not that much faster than real-time. Especially if you want quality.

I've yet to try encoding with AV1.Quote
Reply