BIOSTAR has announced a list of new features for their upcoming 2nd generation RACING series motherboards, including M.2 cooling, 10GBE LAN, LED Armour and 5050 LED Strip support.
These upcoming motherboards will be using Intel's new 200-series chipsets and support a wide range of new features, from M.2 SSD devices, Intel 10GbE LAN though Intel's X550 chipset and lightning charge compatibility to quickly charge QC 2.0 devices,quick
charge and BC 1.2.
BIOSTAR's new RACING motherboards will also use LED armour, which is designed to protect components from static electricity and can be illuminated with RGB LEDs. 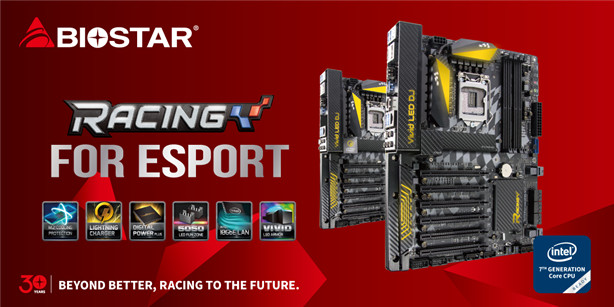 One other new feature is BIOSTAR's M.2 cooling solution, which will allow users to efficiently cool their M.2 devices as well as cover M.2 devices which use ugly green PCBs.

With these new premium features, these motherboards should be coming in with more premium prices compared to older BIOSTAR motherboards, though this feature set is easily competitive with the bigger motherboard vendors like MSI and Gigabyte.

You can join the discussion on BIOSTAR's upcoming RACING series motherboards on the OC3D Forums.

Dicehunter
Passive M.2 cooling is pretty nifty considering those things can get a tad bit toasty.Quote

Greenback
I didn't even know Biostar were still a thingQuote

Doomslayer
Another crap looking motherboard from a crap company.