China's making a splash within the GPU market with Innosilicon's Fenghua No.1 GPU

Innosilicon hopes to rival AMD and Nvidia within the GPU market

The GPU market has few competitors, with AMD and Nvidia being the world's most prominent players. In 2022, Intel plans to shake up the market with their Arc Alchemist series of gaming GPUs and their colossal Ponte Vecchio accelerators, but they aren't the only ones that are looking for a slice of the pie.

Innosilicon has revealed their new "Fenghua No.1" GPU, which has been designed in-house for the Chinese data center market. Innosilicon wants to become China's domestic provider of graphics cards, hoping to take market share from the western GPU giants in the process.

With their "Fenghua No.1" GPU, Innosolicon claims to have greatly enhanced China's ability to power domestic infrastructure and handle workloads like cloud gaming, desktop graphics, and workstation workloads. That said, Innosilicon has made no specific performance claims or compared its products to existing products from AMD, Nvidia, or Intel.

While Innosilicon has not revealed much about its new graphics card, it reportedly supports 4K desktops using HDMI 2.1 and DisplayPort. Their graphics card is also reported as being a chiplet-based product that supports PCIe 4.0 connectivity. The Fenghua No.1 also utilises GDDR6X memory, though, at this time, it is unknown how much GDDR6X memory is used within the GPU or how much bandwidth the Fenghua No.1 can deliver.

The Fenghua No.1 is said to support most major graphical APIs, such as OpenGL, OpenGL ES, OpenCL, Vulkan and DirectX, and OS' like Windows, Linux, and Android. 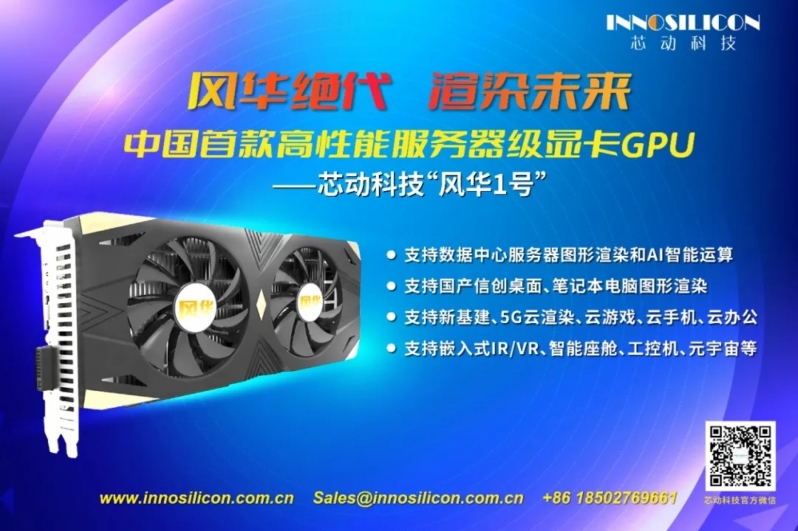 While the Fenghua No.1 GPU is unlikely to challenge Nvidia or AMD within the high-end PC market, the GPU is a legitimate product that has major implications for the GPU market. The Fenghua No.1 showcase's China's ambition to challenge western giants like AMD and Nvidia using domestically produced products.

Creating a GPU that supports modern OS' and graphical APIs is no small feat, making Innosolicon's Fenghua No.1 chip a significant breakthrough for the Chinese market. It will take a while for China to create something competitive with what AMD or Nvidia can currently offer. The lack of performance data in Innosilocon's announcement is telling. Still, the fact that they have gotten this far highlights a high level of determination to create competitive, domestically produced GPUs.

You can join the discussion on Innosolicon's Fenghua No.1 GPU on the OC3D Forums.

dazbobaby
They don't need to win the top slot, all they need are good budget and mid-range cards at a great price, and they'll soon pick a lot of customers.


Hell, all they need to do right now is make the damn things available to buy.Quote

Availability > everything else in todays market.Quote

NeverBackDown
It's for the Chinese market... Not consumers either, data center. You should read the article guys he puts a lot of work into them.Quote

AlienALX
That cooler has "global warming" stamped all over it.Quote

looz
I hope it has a wicked hashrate for the price and power consumption! Innosilicon is a prominent ASIC producer afaik.Quote
Reply