AMD RX Vega series of GPUs are certainly an interesting bunch, particularly in the overclocking department. Now EK has conducted their own research into Vega overclocking, looking into the effects of water cooling on AMD's latest GPU hardware.
Similar research has been conducted by 3rd parties which has delivered similar results, giving us no reasons to doubt EK's findings. So, does a water block improve the performance of AMD's RX Vega 64? 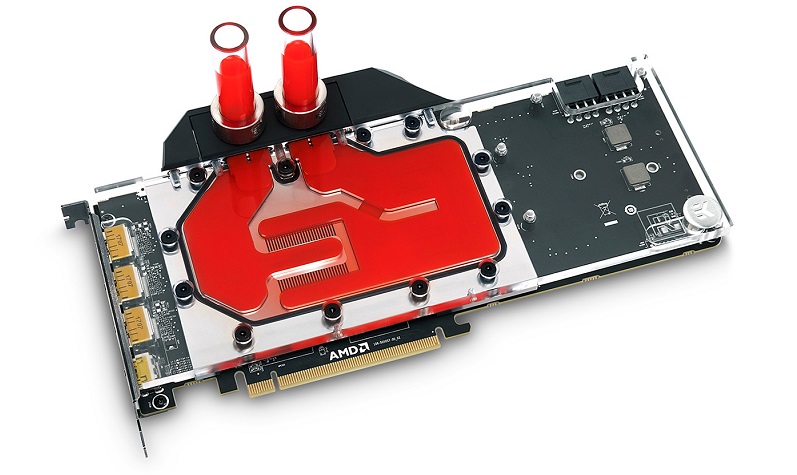 What EK has found is that simply water cooling AMD's RX Vega 64 GPU can offer a 9% performance increase in 3DMARK, owing thanks to factors like lower thermals and the fact that power is moved away from the GPU's cooling solutions (fans) and into the GPU itself. Beyond that, power consumption also drops, owing to the fact that the GPU no longer needs to power and fans.

EK recommends three things in order to get the best performance out of AMD's RX Vega 64 when water cooling, first to undervolt the GPU as much as you can while maintaining stability, second to increase the GPU's power limit to +50% and then overclocking the GPU's HBM2 memory.

When using their water cooled RX Vega 64 with an undervolt of 1.05V (default 1.2V) and an increased power limit of +50% EK was able to achieve a 17% performance increase with only a 5.6% increase in GPU power consumption. This was without an HBM2 memory overclock, though the performance benefit is clear to see.

This leaves us very interested in seeing more RX Vega GPU designs, especially custom board designs from 3rd parties like ASUS, MSI, XFX, Gigabyte and Sapphire. How much will they be able to improve the performance of AMD's RX Vega series GPUs with their own custom power delivery and cooler designs?

You can join the discussion on EK's RX Vega 64 overclocking/water cooling tests on the OC3D Forums.

NeverBackDown
From what I can see online, the best increase to performance actually comes from HBM2 overclocking moreso than core speeds. Probably due to the infinity fabric. Would have been nice if EK also included HBM overclocking in there researchQuote

Gambit2K
Quote:
Look at the picture again, at the bottom it says "winning combination".Quote

NeverBackDown
Quote:
Your point? They still didn't say anything about it in there tests. They just mentioned it in a picture.Quote

NeverBackDown
Still doesn't have a quantifiable answer to my original question.
I already know it improves it. But I wanted to see HOW MUCH under waterQuote
Reply