Gigabyte has become the first company to reveal their RTX 4090 series GPU lineup though a filing with the Eurasian Economic Commission (EEC), revealing eleven GPU models for Nvidia's RTX 4090 graphics card. These listing include liquid cooled GPUs, air-cooled models, overclocked models, and non-overclocked models, an RTX 4090 lineup that will span from the lower tiers of RTX 4090 models to the ultra-high-end.

Gigabyte's planning to launch a full ineup of RTX 4090 series graphics cards. Sadly, this listing does not include any RTX 4080 or RTX 4070 series GPU models, or any RTX 4090 Ti models. Nvidia is currently expected to reveal their RTX 4090 graphics card on September 22nd at their Geforce Beyond event (more information here).

Below are Gigabyte's planned RTX 4090 models. 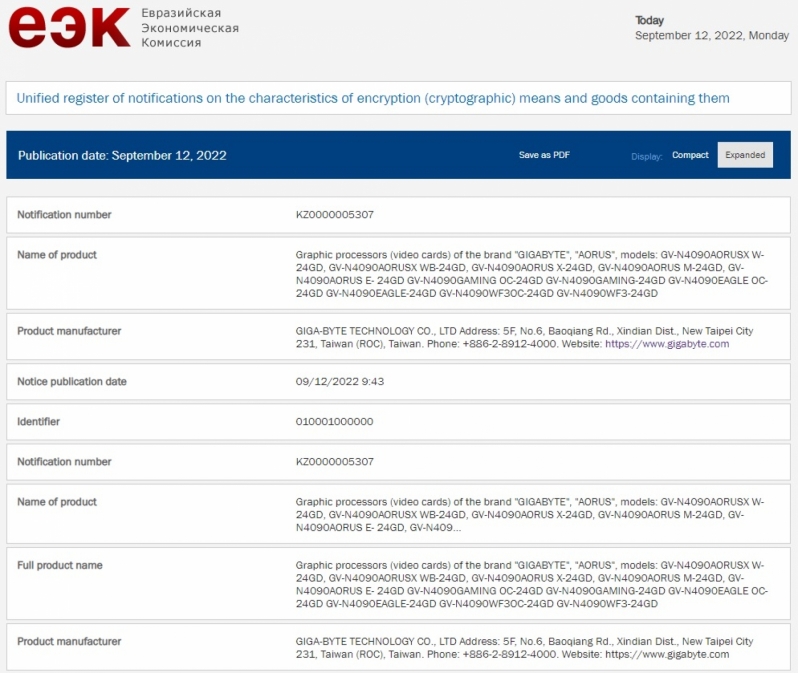 Gigabyte's RTX 4090 listings suggest that Nvidia may be planning to launch their ultra-high-end RTX 4090 graphics card before other RTX 40 series GPU models. Currently, the pricing and specifications of Nvidia's RTX 4090 are unknown, though the GPU is expected to feature 24GB of GDDR6X memory, just like Nvidia's RTX 3090.

You can join the discussion on Gigabyte's eleven RTX 4090 models on the OC3D Forums.

AlienALX
Bring on the plastic.Quote

AngryGoldfish
Quote:
I would say that non-sarcastically. Gigabyte cards are consistently either solid to good performers for the lowest cost. They rarely make duds. I've seen more ASUS duds than Gigabyte duds, and ASUS are usually more expensive. So bring on the plasticit works.Quote

Dawelio
Well atleast ASUS hasn't gotten any parts that explode nor has their server hacked and then give the finger to their customers in terms of warranty claims, due to all of those claims were stored on the hacked server lmao.Quote

AngryGoldfish
Quote:
ASUS has had to recall exploding products as well. People are having issues with Z690 Hero motherboards melting. Virtually every company has had to recall products because of overheating or it being a fire hazard.Quote

Dawelio
Quote:
True, although I still feel that Gigabytes issues has been a lot more severe.Quote
Reply