Eve's HDMI 2.1 Spectrum displays have been delayed until February 2021

Eve's HDMI 2.1 Spectrum displays have been delayed until February 2021

Earlier this year, Eve revealed its Spectrum series of high-end PC monitors, offering gamers HDMI 2.1 display models which can support QHD (1440p) with refresh rates of up to 240Hz or 4K 144Hz depending on your chosen monitor.

Right now, only high-end TVs support HDMI 2.1, and on the monitor market, nothing supports HDMI 2.1. On PC, DisplayPort 1.4 remains the only way to support 4K at framerates higher than 60 FPS, and none of these 4K screens currently support HDMI 2.1.

Eve Devices' Spectrum series is a range of crowd-designed monitors aim to be the first to market with both HDMI 2.1 support and DisplayPort 1.4, features which will be unique to the screen's high-end 1440p 240Hz and 4K 144Hz models, which will offer gamers LG IPS screens, VRR support and more.

This week, Eve confirmed that their Spectrum series of PC monitors have been delayed until February 26th 2021, allowing the company to refine their designs and release displays with no compatibility issues, tighter design tolerances and more community requested features. This time will also allow the company to test their monitors with more HDMI 2.1 devices, such as the PlayStation 5, Xbox Series X, Geforce RTX 30 series graphics cards and Radeon RX 6000 series GPUs.

Eve has also confirmed that DVT (Design Verification Samples) are due to be sent to "some of your favourite media" over the coming weeks. Note that these early press units will not be representative of Eve's final product.

More information about Eve's Spectrum display delay is available in the quote below, and additional Spectrum manufacturing details are available here.

In this update, we will go through the latest Spectrum developments as well as provide an update to our shipping timeline.

We will postpone Spectrum shipping for 4K and 240Hz models from Late December 2020 to February 26th 2021. Though Spectrum is currently mostly functional, and the first iteration of mass production tooling has already been developed, there are still bugs, imperfections in design & manufacturing tolerances, as well as compatibility issues that we need to fix. We strongly believe that we shouldn’t ship Spectrum until it is ready.

We are building an exceptional monitor for content creation, consumption, and competitive play. Based on your feedback, we’ve pushed our partners and suppliers to deliver only the best, including community-requested features such as power delivery over USB-C, HDMI 2.1, integer-ratio upscaling, and precise overdrive gain adjustment. Promising these features is one thing. But to deliver, we need more time to test, improve, and refine.

Some of you may have already built a new battle-station around an RTX 3000-series GPU or ordered your next-gen console. When we ship Spectrum, it will work perfectly with all of these devices, and you will enjoy it for many years to come. But don’t take our word for it: In the coming weeks, we will send out DVT samples to some of your favorite media. We are very aware that waiting to complete your new setup is a big ask, but we are also confident that Spectrum will be worth the wait!

The first of these three Spectrum displays is their $349/€349 model, which features a resolution of 2560x1440, a refresh rate of 144Hz, DisplayHDR400 certification, and an adaptive-Sync range of 48-144Hz. This model is known as the Eve Spectrum QHD 144Hz. This is the only model in the series to lack HDMI 2.1 support.

hen looking at Eve's Spectrum range, it's easy to see that the range will tick a lot of boxes for gamers, offer competitive pricing, high-end specifications and an aesthetic that's well suited to gaming rooms and offices alike.

Eve's Spectrum monitors can be pre-ordered here. We recommend waiting for media testing/analysis before pre-ordering. 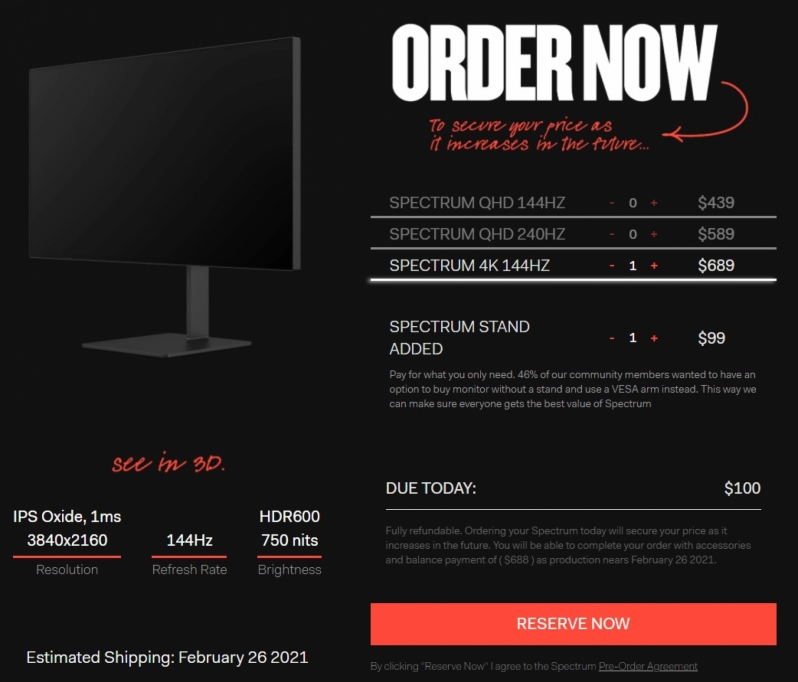 Bagpuss
This project is taking on a Star Citizen like quality....Quote

NeverBackDown
Quote:
Not really. Delayed 2 months. They've been very open about it and are in the final stages of manufacturing.Quote

robbiec
I've the 4K/144 on order. A couple of months won't break me. Rather something spot on out if the box than messing around with firmware to fix niggles.Quote
Reply