EVGA has released two new ELITE versions of their GTX 1080Ti FTW3 GPU, offering the same core clock speeds and cooling solution as their standard FTW3 Gaming counterparts but offer enhanced memory clock speeds and new white and black GPU shroud colour options.
The only performance upgrade here is a 9% increase in memory clock speeds when compared to EVGA's standard GTX 1080 Ti FTW3 Gaming model, though this will only improve this GPU's performance in select circumstances, where the GPU is bandwidth constrained.

This increased the memory bandwidth of the GTX 1080 Ti from 484GB/s to 528GB/s, allowing this new model to surpass the 500GB/s barrier to offer half a terabyte per second of memory bandwidth.

On EVGA's own website both of these new Elite GTX 1080 Ti FTW models are listed with prices of $849.99, with both the white and black versions coming with three-year warranties. 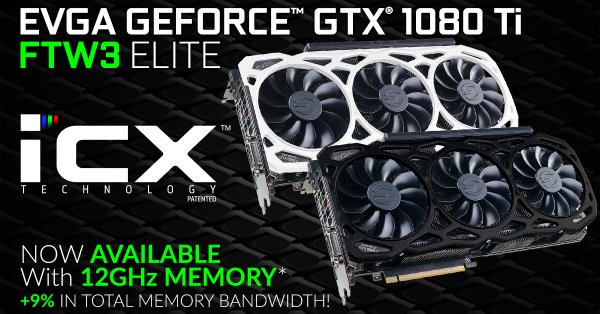 You can join the discussion on EVGA's GTX 1080 Ti FTW3 Elite GPU on the OC3D Forums.