A single slot GPU and a sexy looking water block

This graphics card is one of two variants of the RTX 3090 KINGPIN that EVGA produces. The company has built a Hybrid model that features an All-in-One Liquid Cooling solution with a 360mm radiator and a Hydro Copper model with a custom water block. Both models feature the same 12-layer PCB, triple 8-pin PCIe power inputs, a 23-phase VRM and "smart power stages".

At this time, it is unknown when EVGA's Hydro Copper RTX 3090 will be released or how much it will cost. EVGA is expected to reveal more information about the graphics card soon, releasing more images of the GPU, more detailed specifications and pricing. 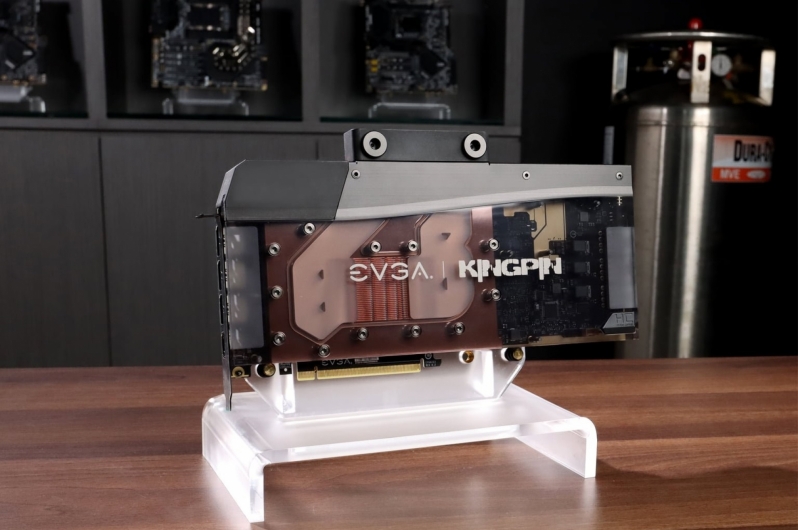 You can join the discussion on EVGA's RTX 3090 KINGPIN Hydro Copper graphics card on the OC3D Forums.

queeg
lol have u just seen the priceQuote

Dicehunter
Quote:
Oh I'm sure someone with more money than brains will end up buying 1 or more.Quote

Kaapstad
Quote:
No one in Europe is going to buy one as the Kingpin is not listed.

From what I have seen of people benching them on the EVGA forums, they are not that good anyway.

EVGA are losing international customers over this and as far as I am concerned they put this latest SKU where the sun don't shine.

There was a time when most serious users would recommend EVGA, not anymore.Quote

Dicehunter
Oh well, Plenty of other brands to choose from, Just have to wait on stock.Quote
Reply