ASUS has recently unleashed a new GPU/monitor bundle that allows those who purchase select GPUs and displays at certain retailers to get a free copy of Assassin's Creed Origins when it released later this month.
This applies to the following products, though please note that this bundle does stack with Nvidia's "Forge your Army" bundle for Middle Earth: Shadow of War when applied to applicable products. 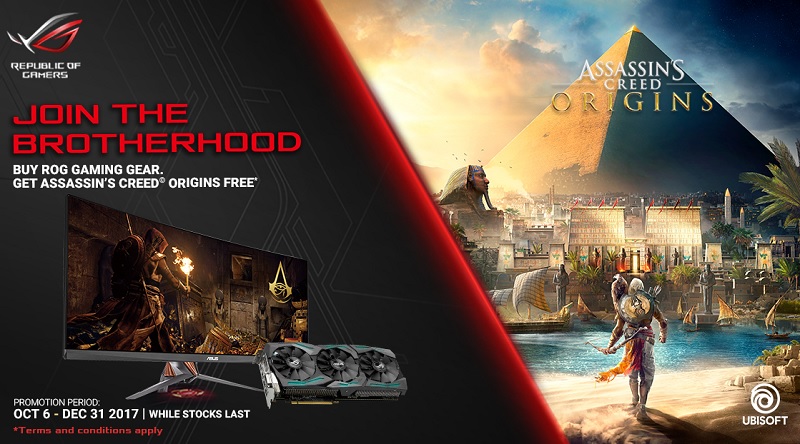 Purchases of applicable products from selected retailers between October 6th and December 31st will be given an ASUS code that can be redeemed on ASUS' redemption website from October 27th. This will give purchasers a free copy of Assassin's Creed Origins on UPlay.

More information on this bundle is available on ASUS' official "Join the Brotherhood" bundle web page.

You can join the discussion on ASUS' ROG "Join the Brotherhood" bundle on the OC3D Forums.

NeverBackDown
Damn. I should have waited to buy my GPU..Quote

Vipermk2
Quote:
Yup me too, I got 'For Honor' with mine, not even installed it.

NeverBackDown
Quote:
I got nothing for mine

TheF34RChannel
Wish they paired a game like this with Coffee Lake but no, nothing aw

Warchild
Quote:
You dont usually get the codes in the box. you contact the e/retailer you bought it from and they give you one.Quote
Reply