The EEC is once again a prime source for GPU leaks

Thanks to a new EEC filing from Gigabyte, we now know that multiple new graphics cards are on the horizon, including a new 12 GB model of Nvidia's RTX 3080 and a 16 GB version of their RTX 3070 Ti. Additionally, AMD reportedly has a Radeon RX 6500 XT model on the way.

For Nvidia's RTX 3080 12 GB, it looks like Nvidia's boosting the memory of their RTX 3080 to deliver a 20% memory bandwidth and capacity upgrade. For the RTX 3070 Ti 16 GB, the graphics card appears to deliver users a straight 2x memory capacity boost by switching out the GPU's 1 GB GDDR6X chips with 2 GB GDDR6X chips.

AMD's RX 6500 XT appears to be a 4 GB graphics card. Sadly, we cannot guess at the performance levels this GPU will offer, aside from the fact that it should outperform the RX 5500 XT. It remains to be seen if an 8 GB version of this GPU exists. 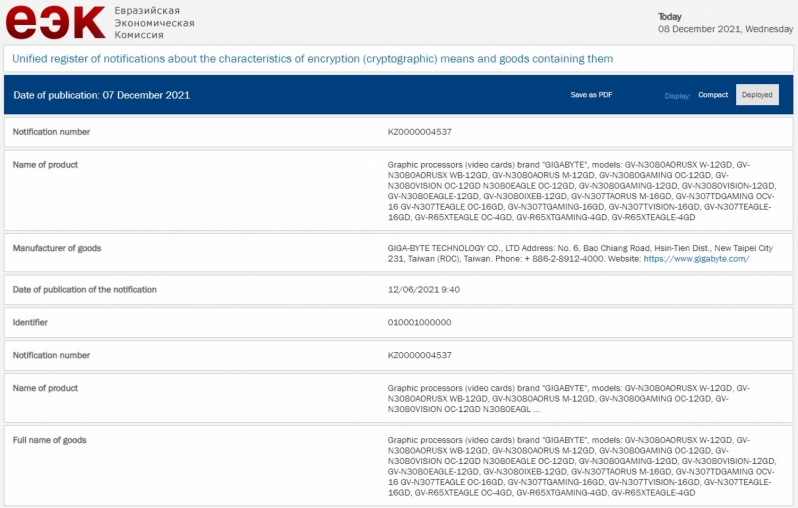 These new graphics cards are expected to be revealed at CES 2022. Retail launches for these new products should happen within weeks of each product's official unveiling.

Could see that one coming. For example when I was playing through FC6 I would get the occasional crash to desktop stating "Not enough VRAM". Apparently 11gb is the minimum for 1440p with the hd textures.Quote
Reply