A refreshed RTX 3060 with anti-mining features

These new graphics cards are listed as version 2.0 variants of their existing models, confirming that Gigabyte and Nvidia do not intend to market these new GPUs any differently than their standard RTX 3060 equivalents.

Nvidia's LHR technology is designed to throttle Ethereum mining performance, drastically lowering the cryptocurrency mining potential of these graphics card. This mining nerf should be effective on Ethereum and its derivative cryptocurrencies, with Ethereum being the most profitable currency to mine on modern GPUs at the time of writing.

While Nvidia's LHR GPU models are good news for pure gamers, it cannot be denied that Nvidia is removing a useful feature of their Ampere product line. Nvidia has the profit-motivation to remove Ethereum mining as a feature of their Geforce product line, as Nvidia has launched its new mining-optimised CMP series products. While this move will help improve GPU availability for gamers, Nvidia's move with LHR Geforce GPUs can also be seen as anti-consumer. Should Nvidia be telling its users how to use their graphics cards? 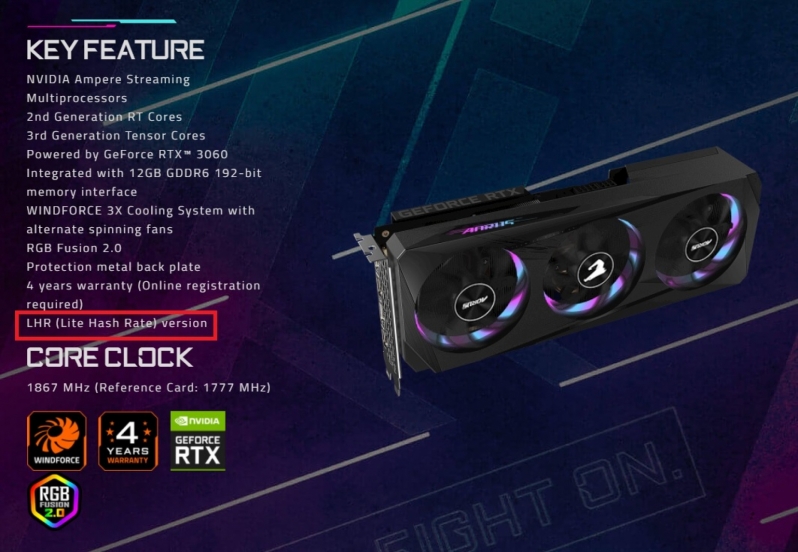 Gigabyte's new LHR RTX 3060 graphics cards all appear to be visually identical to their non-LHR counterparts, offering gamers the same GPU clock speeds as before and the same performance outside of Ethereum mining.

You can join the discussion on Gigabyte revealing RTX 3060 LHR graphics cards on the OC3D Forums.

war-dog
what about those, who don't mine Ethereum? There are thousands of other crypto coins you can mine.Quote

AngryGoldfish
Quote:
Maybe it's more of a PR stunt than anything.Quote

war-dog
It must be a PR stunt.Quote
Reply