Thankfully, Gigabyte has opted to steer clear from Nvidia's reference specifications, opting to utilise a factory overclock that boosts this graphics card beyond Nvidia's Founders Edition, though at this time it is unknown how hot this GPU will be under load.

To push past normal reference blower coolers, Gigabyte has decided to use a direct touch vapour chamber and a full-copper heatsink to maximise heat conduction away from the RTX 2080 Ti's large 754 mm² TU102 core, making this graphic's cards cooler more potent than reference-style blower RTX 2080 Ti models. Even so, it is hard to imagine this card offering better thermal and acoustic performance than Nvidia's RTX Founders Edition series coolers.

As for rear I/O, this graphics card is the same as Nvidia's Reference/Founders Edition design, offering three DisplayPort 1.4 outputs, an HDMI 2.0 output, and a VirtualLink connection. The Gigabyte Aorus 2080 Ti Turbo will ship with a three-year warranty, which extends to four years after the product is registered online. 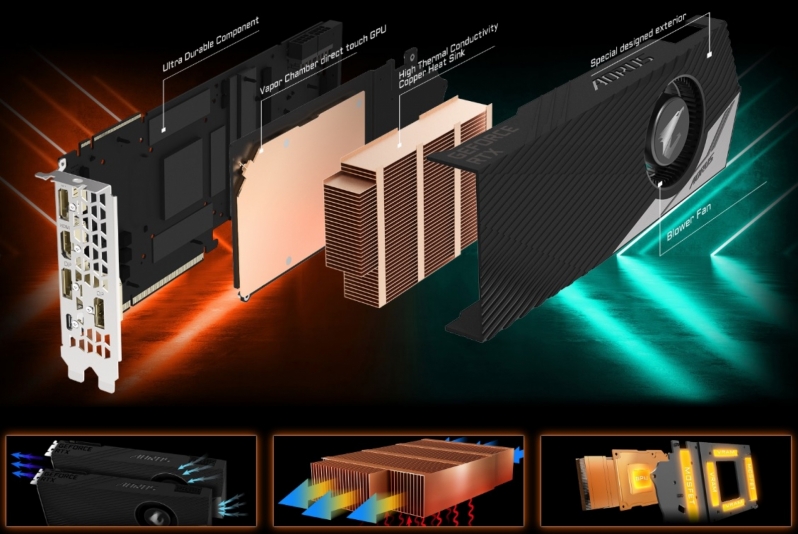 While blower-style coolers are often considered the worst designs in the high-end GPU market, we must remember that they offer features that competing designs lack, such as the ability to directly exhaust GPU heat outside of a system, instead of blowing it around a PC to exit your PC elsewhere.

When it comes to the world of ITX systems blower-style coolers are often a must, allowing us to see why cards like the Aorus 2080 Ti Turbo exists, even so, we don't see a huge potential userbase for this graphics card, as not many consumers are likely to spend $1,000+ on a blower-style graphics card. That said, Gigabyte may plan to use this GPU in in-house systems.

You can join the discussion on Gigabyte's Aorus 2080 Ti TURBO graphics card on the OC3D Forums.

AlienALX
I like the renders. I also like blower GPUs too. Will be interesting to see how this pans out.Quote

Warchild
Quote:
If it is anything like the ASUS variant, its only good for users of headphones. The biggest positive is dumping air outside the case. But the ASUS Turbo does create quite alot of noise on the 2080ti.

That said, when I compare my 1080ti reference to the gainward golden sample blower, the difference is exceptional good. Gainward made a fantastic blower, performing better at lower speed.

Perhaps same applies here. I'll always choose a blower cooler over those that dump heat inside the case.Quote

AlienALX
I'd take the noise over the heat in the case. I opened up my rig the other night (Vega 64) and it was like when you open the door on a fan assisted oven.

My preference is water, but I would rather have a noisy blower otherwise.Quote

Warchild
Quote:
Exactly my opinion. So if bemuzes me when I see people suggesting non blower style cards for SLI/Crossfire.Quote

Dawelio
Why do companies always use words such as ”Ultra Durable Components” in their marketing?... It just sounds so lame, childish and non-professional in my opinion.Quote
Reply