GUNNIR has revealed their first custom Intel GPU, and has teased their Intel-based "flagship"

Starting today, Intel's ARC A380 is available in China though OEM system builders, and GUNNIR's ready to deliver more performance than Intel's reference models with a custom OC model that features dual fans and an 8-pin power input.

This custom GPU model features eight Xe cores that run at 2450MHz, and features 6GB of GDDR6 memory running at 15.5 Gbps. With a 96-bit memory bus, this gives the GUNNIR ARC A380 186GB/s of memory bandwidth. 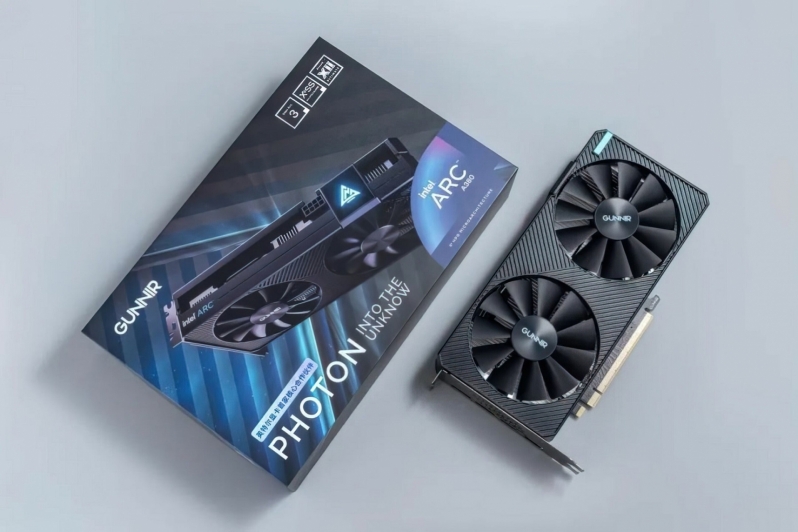 GUNNIR's ARC A380 features four display outputs, offering users three DisplayPort outputs and a single HDMI 2.0 output. At this time it is unclear if any ARC A380 GPUs will support HDMI 2.1.

Below, GUNNIR has a tease for their "future flagship", a triple-fan graphics card that appears to be two slots wide and what could be two or three 8-pin PCIe power connectors. At this time, the name of this GPU model has not been confirmed, though it is likely to be an Intel ARC A7XX series product.

The blurry image below appears to use similar design language to the GUNNIR ARC A380 Photon OC, which could potentially make this future GPU a ARC A780 Photon GPU.

You can join the discussion on GUNNIR's ARC A380 Photon graphics card and their planned "future flagship" on the OC3D Forums.

AlienALX
Quote:
LMFAO oh god how did I miss that ! that's top Engrish that !

It's nearly as good as "Color - Sliver"Quote

KingNosser
A product Intel should be proud of, just shows they are noobs in the GPU market they really should have made more effort on partners than going cheap mass rubbish thou saying that it's what it is so does it matter LULQuote

Warchild
Quote:
Why would they care what the western world thinks? China market is bigger than most combined.

Why do you think all GPU/Mobo/Gaming peripherals are tacky LED infested immature rubbish? its because its still massive in Asia. Just because box art has a typo won't stop Intel making a massive initial sale. They have Manufacturers there selling 3080ti etc, that most on this forum have never heard of.

Its hilarious that Gunnir have tried to stand out with a little badly worded Engrish, but who knows, perhaps the typo will spark a little Viral notoriety that works in favour of Intel.

And to show the extent of how tacky brands like Yeston are in Asia. I give you... the CAT GPU