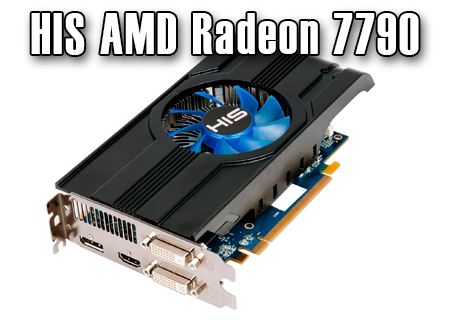 Once again we here at OC3D get to look at one of AMD's new 7790s. We've already looked at VTX3D's offering, which we weren't all that impressed with, so we're hoping that HIS can provide something more substantial.

This is only a quick look at the card so no performance comparisons can be made between the two that we've had with us. Having said that, it should be obvious from the get go that HIS already has one-up on the VTX3D card. Watch the video to see if you can see what we mean.

For those of you who read our review on VTX3D's 7790 should remember that we weren't impressed by the card at all, especially its poor aesthetics. This shortcoming makes HIS' alternative all the sweeter as its cooler, although still not completely full-cover, is leagues ahead of the flashback to 2005 that VTX3D presented us with. The shroud does still exhaust its hot air out the sides of the card and thus you'll need to ensure that your case has ample ventilation.

If you have a window in your case and your motherboard's PCB isn't blue this may not be the card for you. If not, there's no real reason why not to get this card if it fits your needs already. Out of sight out of mind after all, and really the PCB isn't all that much of an issue.

This card is 4K ready and it can be used to power 3 monitors, but we strongly recommend that you only do so for a non-gaming experience (note that once you want to power three monitors you'll need to pick up an active DisplayPort adapter to get the third monitor working) and the 7790 will happily power massive resolutions if the PC's main use will be CPU intensive tasks like video and photo editing web design etc. In a work station environment the card will thrive and TTL has regularly said these lower end cards would be perfect for his main office work station (Orca) but he only uses the bigger cards where most people wouldn't understand he doesn't game!

Talking of gaming, this card would be a reasonable gamer at 1080p if you are willing to turn the AA or detail settings low, but if you are on a tight budget and have this card in your sights the best way to get the FPS up will be to reduce the resolution down from that iconic HD setting. Yes you need to sacrifice on some things to make the most from your limited budget but it can indeed be done.

Thanks to HIS for the AMD Radeon 7790 on show here today. You can discuss your thoughts on the OC3D Forums.