Sadly those of us who are able to okay the Hitman Beta will be unable to play the game using Microsoft's new DirectX 12 API, with the Beta game only being able to run using the older DirectX 11 API.

The Hitman Beta will be available to play between 17:00 CET on February 19th until February 22nd at 17:00 CET worldwide, but only to those who have pre-ordered the title.

You can see the games options menu below, showing that the game has proper SMAA options and even super-sampling options, giving gamers plenty of ways to deal with Aliasing in the game. Right now the options menu is expected to change for this game, as the game will require the option to switch between DirectX 12 and DirectX 11 and may will hopefully include additional graphical options. 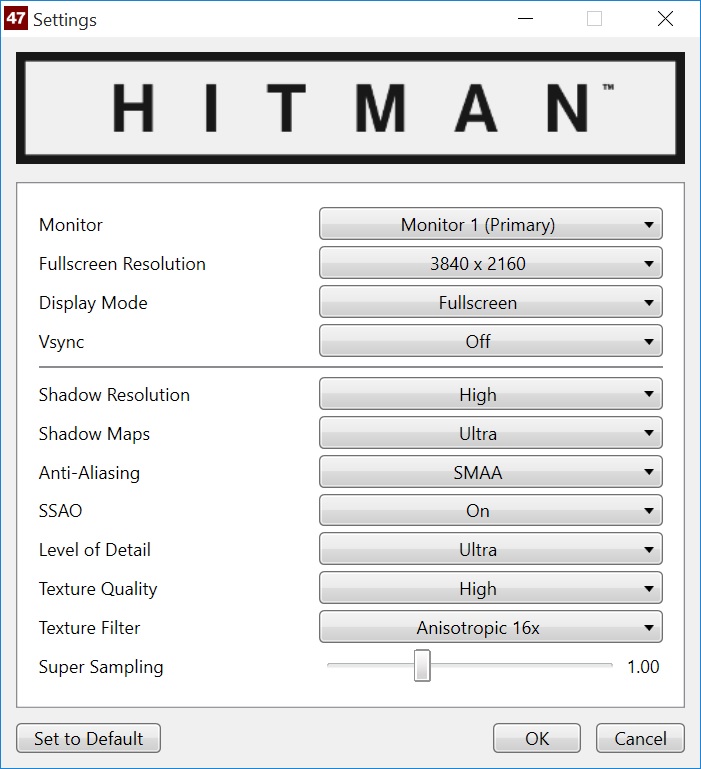 Below are the system requirements for IO Interactive's upcoming Hitman title are below, showing that the game requires 8GB of system memory a quad core CPU and a minimum of a GTX 660 or HD 7870.

This title is an episodic title, meaning that this game will be sold on a level by level basis, with the first episode releasing on March 11th and with the final episode being expected in holiday 2016 or early 2017.

This year's Hitman game is confirmed to be compatible with DirectX 12 and will be making heavy use of Asynchronous shaders, and should be a great showing of what DirectX 12 can offer in terms of performance improvements over DirectX 11.

You can join the discussion on the Hitman 2016 beta lacking DirectX 12 support on the OC3D Forums.

xnax2802
Lack of DX12 is forgivable in a beta me thinksQuote

Drakkonen
Quote:
Yes but that sentence is most definitely not!

"Hitman's Beta does not use of the DirectX 12 API, but we can have a here is at the Beta's options menu."

That makes a hilarious amount of senseQuote

JR23
Quote:
Yeah but, in all fairness, xnax doesn't write news articles for a living