How much will Intel's Arc A-series GPUs cost? Pricing Leaks ahead of launch

Following the release of official benchmarks for their Arc A750, a slide has leaked that details the performance targets and pricing targets of Intel's entire Arc A-series. This series of graphics cards includes five GPU models, including the Arc A770, A750, A580, A380, and A310.

Pricing-wise, the Arc A770 sits within an area of Intel's leaked slide that indicates that the graphics card will cost below $400. The graph also indicated that Intel is not releasing an Arc A-series graphics card that sits within the $400+ "Enthusiast" area of the GPU market. 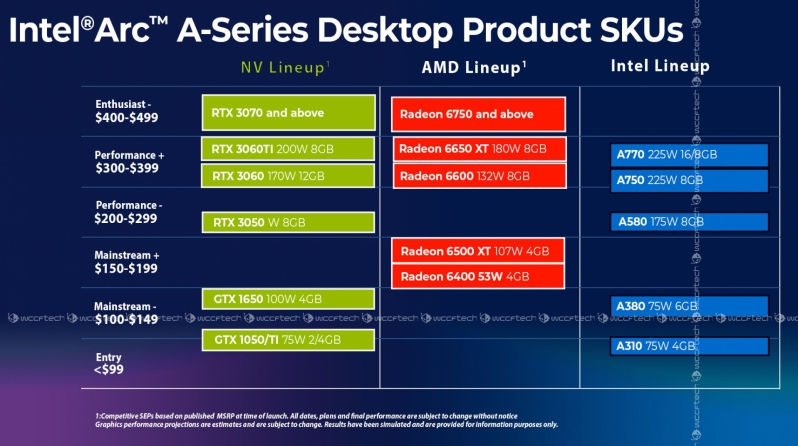 You can join the discussion on Intel's leaked Arc A-series pricing on the OC3D Forums.

AngryGoldfish
Intel would have been the heroes if they had got these out a year ago, or even 8 months ago.Quote

AlienALX
Quote:
True, but IMO it is far better to delay something if it isn't right.

If their 3070 competitor does indeed cost $399 or less that is a win for every one.Quote

Warchild
Quote:
Should have delayed it longer if this is anything to go by.

AlienALX
Quote:
Well to be fair that is China's problem because it hasn't even launched in the West yet.

Just watched a LTT video and they are saying that the top end card will be cheap AF. They are very game dependent, but if your game is one in tier 1? you will be getting the best value for money in about a decade when it comes to GPUs.

The resize bar thing? well I would expect it to work better with it on, and AMD not supporting it is hardly Intel's fault is it? that's like asking Nvidia to work with AMD to make sure the competition is fair.

If the top end GPU does indeed come in at less than £400 I'm game. If anything just for something different, and reasonably afforable, to play with.Quote
Reply