Back in November Intel stepped back into the world of graphics, forming their new Core and Visual Computing Group with Raja Koduri, the former head of AMD's Radeon Technologies Group, at the helm.

This announcement brings with it an exciting future for the graphics/compute markets, with Intel aiming to become an AMD+Radeon-like combination that will be able to deliver products that suit a range of markets. In the future, Intel also has the potential to create dedicated graphics solutions that could take on AMD and Nvidia in the gaming/compute graphics markets.

Now rumours are emerging that state that Intel plans to create dedicated/discrete graphics chips using their 12-generation and 13th generation graphics architectures, which are code-named "Arctic Sound" and "Jupiter Sound" respectively. These rumours come from Ashraf Eassa, an industry commentator from the Motley Fool, who also states that these chip designs will connect to future Intel CPUs using their EMIB technology.

If these statements are correct, Intel is planning to replace the custom Radeon Graphics Chips that the company currently used in their Kaby Lake-G series processors. The mention of EMIB shows that Intel also plans on moving their graphics chip closer to their CPU, with today's Radeon chip being connected to Intel's CPU using eight PCIe 3.0 lanes. 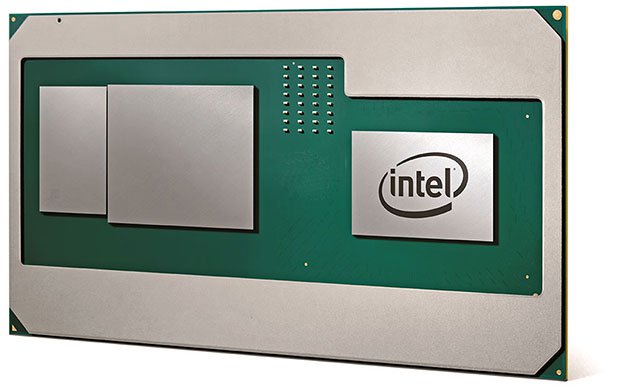 It is unlikely that we will see these 12th or 13th generation graphics chips from Intel until at least 2020, as the company's newly formed Core and Visual Computing Group will need time to create their own graphics IP, which is not an easy task.

You can join the discussion on Intel's rumoured dedicated graphics chips on the OC3D Forums.

AlienALX
So it was a quick "in out wipe it on a tea towel" deal. Haven't Intel learned that they just suck at making GPUs?Quote

looz
If they suck, who makes a more power efficient GPU for office and web browser use?

Though I don't expect the earliest discrete GPUs to be good across the board, maybe competitive in Dx12/vulkan tasks against entry level cards, but Dx11 relies heavily on driver optimisation. Then again the Vega GPUs on their NUCs seem to compete with laptop 1060s, and I don't see them pushing a less powerful successor so there's a chance that they'll be interesting.Quote

AlienALX
Quote:
If you took any modern Nvidia card and cut it down to be as slow as the onboard Intel then it would probably be as efficient, if not more so.

Intel suck at making GPUs. That's not my opinion it's just a fact. If they were good they would not be putting their arch rival's cores on their own custom PCB.

They've tried continually to be good at it and have just sucked.Quote

AngryGoldfish
I also would say that Nvidia could make a GPU as compact and efficient as Intel if they so decided to. But do they really need to? Their market is extremely powerful data centre graphics processors and other compute sectors and of course gaming. None of those sectors benefit from tiny processors. It would make sense for AMD to make a tiny efficient GPU, but not Nvidia. I could be wrong though.Quote
Reply