The world needs more GPUs, and Intel wants to deliver them

Let's put things plainly. The GPU market is a disaster right now, and it has been for over a year. Barely anything is in stock, and practically nothing is available at pricing that could be defined as reasonable. The era of cheap gaming PCs is gone, and the enthusiasm within the PC gaming market is slowly getting strangled to death by ultra high prices and inadequate supply.

Intel's Raja Koduri is on a mission, and that mission is the launch the company ARC series graphics cards and get "millions of ARC GPUs" into the hands of PC gamers on a yearly basis. This move will transform the discrete graphics market into a three horse race, adding additional competition and supply into today's heavily constrained market. It is an understatement to say that Intel's impact on the market will be a positive one.

While Intel's first round of ARC series graphics cards aren't expected to surpass AMD/Nvidia's current offerings, all Intel needs to do is release products with competitive pricing to find success within today's market. In a world where GPUs are expensive and in short supply, all Intel needs is a GPU that is in stock and at a reasonable price.

In a recent tweet, Raja Koduri acknowledged the GPU crisis that the PC gaming world is facing, and hopes that their ARC series graphics cards will help to address this longstanding problem. 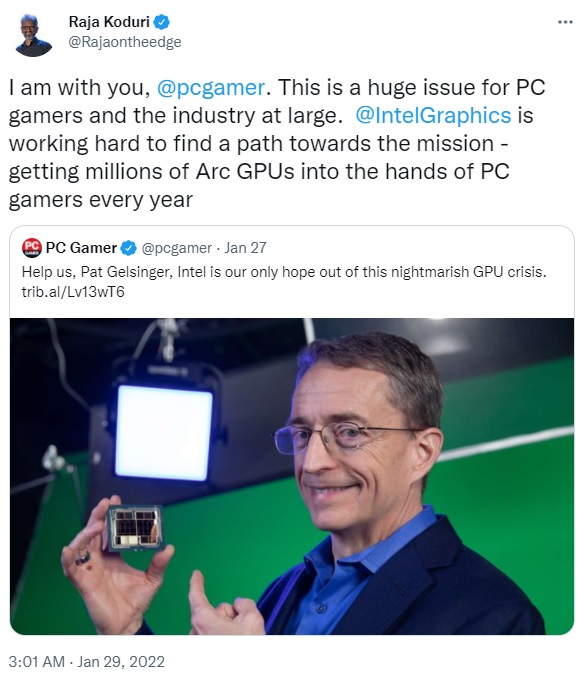 Long-term, Intel's move into the discrete GPU market will spur increased competition within the entire PC gaming ecosystem. Nvidia/AMD will not just need to compete with each other, they will also need to compete with Intel, and that should help force prices down and force both companies to deliver better products. Intel's move into the GPU market can only have a positive impact on the PC market. It's not like it can get much worse...

You can join the discussion on Intel's plans to ship "millions" of ARC series GPUs to gamers every year on the OC3D Forums. 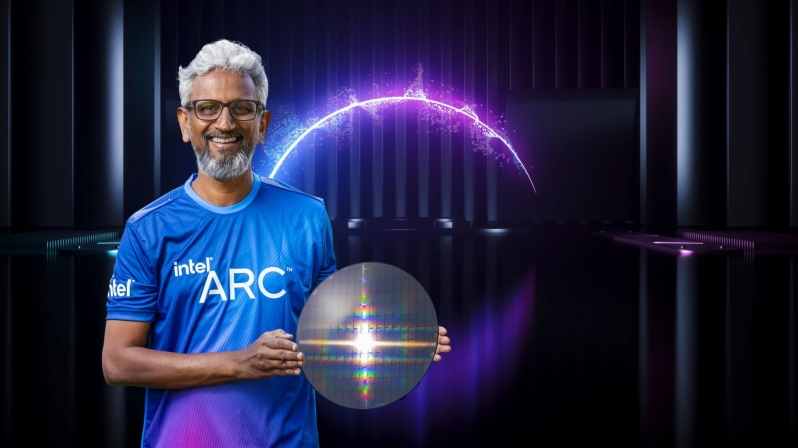 Gothmoth
one thing is for sure.....intel could not wish for a better time to step into the GPU market.

even a half decent GPU could gain them a lot of marketshare if they can deliver in volume.


how many people would consider buying a first generation intel GPU otherwise?Quote

dazbobaby
Quote:
If they don't hurry up they'll be in trouble.
The miner market is dying, the price of coins fell off a cliff, making it unfeasible to mine any coin. Once these ex-miner cards flood the market, it's game over for new GPU's for at least 12 months.
https://coinmarketcap.com/

NeverBackDown
The crypto market will rebound. It's just like stocks.Quote

grec
The value change is quite small and unlikely to affect things yeah, however the difficulty bomb intended to end Ethereum mining during the transition to PoS is supposedly due to detonate this year. That will wipe out the most profitable form of GPU mining, and likely lead to this "flooding" of the market with 2nd hand cards.

However, this isn't a huge amount of cards, at the end of the day the vast majority of gaming cards sold in late 2020 and 2021 were sold to gamers, only a fraction were found to have gone to miners, the graphics card stock issues in 2021 were primarily related to stock and shipping. NVidia did release cryptocurrency-specific cards using old dies to meet miner demand without impacting gamer demand and this seemed successful later in the year. Even then most of these cards will probably stay within Asian markets. So I doubt these ex mining cards hitting the market will mean much for sales of new cards in Western markets.Quote
Reply