How many of these GPUs are for the DIY market?

Intel expects to sell millions of GPUs this year

During the company's 2022 Investor Meeting live event, Intel's Raja Koduri confirmed that the company plans to sell over 4 million ARC Alchemist GPUs this year. Arc Alchemist discrete graphics chips are expected to ship first in Intel laptops this quarter and come to the desktop market next quarter.

Intel's 4 million discrete graphics units will be split across multiple markets, with Intel confirming 50+ design wins with companies that include ASUS, Dell, MSI, Acer, HP, and Gigabyte. We expect Intel to push hard for ARC GPU adoption within the notebook market, as Intel wants to push the benefits of All-Intel systems hard in the future. Intel already does this within the laptop market with their Intel EVO program.

While four million units sounds like a big number, it is worth remembering that this number has to be split between the notebook market, the OEM/SI PC market, and the DIY PC market. While four million graphics cards is a lot of graphics cards, it is not enough to solve the GPU supply crisis. That said, these units will certainly help address today's supply challenges.

Software-wise, Intel has confirmed that they already have over 100 software partners, who are integrating XeSS (Xe Super Sampling) within their games and Deep Link acceleration within their applications. These partnerships will increase the performance of Intel discrete graphics chips in supported games and productivity software, which is great news for consumers. 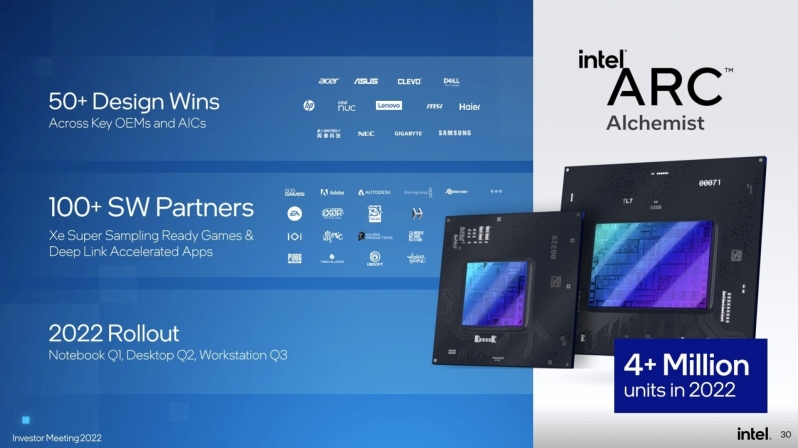 Over the next three years, Intel plans to aggressively launch new GPU architectures to succeed their Alchemist series. Intel's Battlemage architecture is due to launch in the 2023-24 timeframe and Celestial is due to launch after 2024. While Intel's ARC Alchemist GPUs are unlikely to dethrone AMD or Nvidia's current offerings, the company is keen to showcase that they plan to stay in the GPU market long-term. Intel has already confirmed that Druid will be their Celestial successor, which means that we should expect at least four generations of graphics cards from Intel.

You can join the discussion on Intel's plan to ship over 4 million graphics cards this year on the OC3D Forums.


if it is it will make no big dent i guess. but it will sure help.Quote

NeverBackDown
Biggest hurdle is on the software side. Can they get solid stable drivers with modern features and can already released games from the get go support the new architecture without issues.

If they can't do that it doesn't matter if they perform well.Quote

KingNosser
While i don't feel them numbers are much tbh, it's something, but would i ever want to be an early adopter on a new GPU not a chance, but hopefully they can do it right and thats the real issue really. while some will take them up on that others will be watching closely to see how well they do and if they do well then maybe in the future.

They need to get it right or they might as well quit now, regular driver updates are a must on new games, so i hope the team in place can deal with that.

They also need to get moving quickly onto the next batch as they are going to be left in the dust come the end of the year.Quote

Dicehunter
While a 3rd player in the market is sorely needed they are going to be behind fairly quickly, Nvidia is set to release their new 4000 series around September, Likely the same time as AMD's RDNA3, And considering Intels top of the line GPU will be around 3070 Ti performance it is going to have to come in at a really low price to compete with Nvidia and AMD's next gen offerings.Quote

AlienALX
Quote:
Nvidia can race on all they want to. It's not about selling the top end GPU and never was. Most people would settle for a kick in the nuts about now. You know? A 6500XT or 3050. The former being an absolute insult to PC gamers.

Intel have delayed ARC for a couple of months so expect it around June, not April as touted. The reason? Drivers literally. Raja made a statement with words to effect that the drivers are critical.

There are plenty of cards in stock now. Like literally loads. Problem is they're all lolprice.Quote
Reply