Does Intel have what it takes to compete with AMD and Nvidia long-term?

Intel's reportedly concerned about the viability of its discrete GPU plans

Intel's much-hyped entry into the gaming GPU market has suffered some major setbacks, so much so that the company's ARC Alchemist A-series graphics cards may soon need to contend with next-generation graphics cards from both AMD and Nvidia, rather than today's RX 6000 series and RTX 30 series products.

Based on the information that Intel has published about their ARC Alchemist series graphics cards, Intel's ARC A-series is both unable to compete with current-generation high-end graphics cards from either of their competitors, and that their first-generation gaming GPUs deliver poor performance in older games using legacy APIs.

Things are so bad that Intel's upper management has reportedly reconsidered the viability of the company's gaming GPU roadmap. According Coreteks, who cites a source from within Intel's dGPU team, even Intel's next-generation Battlemage GPUs are looking "extremely questionable", signalling that Intel's dGPU woes are far from over.

Intel's dGPU program is being evaluated for continuance. Upper Intel management is concerned about the viability of its dGPU moving forward in a fast changing market given its track record of Alchemist execution currently (...) and the execution of next-gen Battlemage is already extremely questionable. At this time it does not like like [the] data center GPU is on the chopping block - alleged Intel source

Today, Intel confirmed that they were shutting down their Optane memory business, a clear sign that Intel is cutting down the areas of its business that aren't making money or are not a core part of the company's business plan moving forward. Intel is currently "evaluating divesting businesses that are either not sufficiently profitable or not core to our strategic objectives". If Coretek's source is right, Intel's dGPU business is a business that Intel considered shutting down.

Thankfully, Intel seems unlikely to pull the plug on its discrete GPU plans. The company's data center GPUs appear to be safe, and axing the company's multi-year gaming GPU roadmap would startle investors and be seen as a major U-turn for the company. Intel has publically stated that they are in the gaming GPU market for the long haul, and that means that changing those plans would kill Intel's credibility, especially at this early stage.

It doesn't take non-public information to know that we've fallen short of what we'd hoped to do by this stage. Not just because of bad execution (...), but we have definately dropped the ball in some areas. But we always knew getting to this point was going to be a learning process and there are real changes to priorities and processes are being made to correct these failures in the future. - alleged Intel source 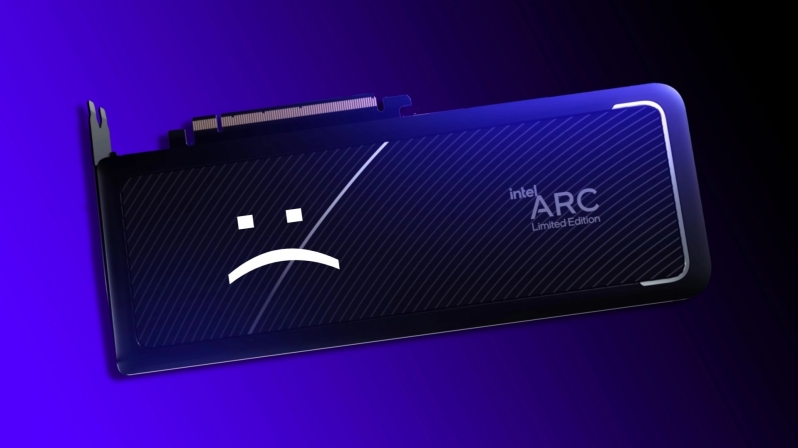 Currently, Intel's graphics leadership is not confident. Intel faces strong competition from both AMD and Nvidia, and the fact that much of the world is entering recession points towards a difficult future for the GPU market. It will be hard for Intel to compete against these established players within the GPU market, as Intel needs to earn the trust of gamers.

Trust me, nobody in the graphics leadership is cocky right about now. Everyone knows that we have more or less under-performance across various graphics programs.

But I still believe that Intel needs something like what we have in the graphics organisation. There might be some good reasons to do it, but I would be shocked if [management person] pulled the plug on the whole thing. - alleged Intel source

As it stands, Intel is unlikely to axe its discrete GPU division. That said, if Intel's poor financial performance continues, discrete GPUs could become a item on Intel's chopping block. Intel's discrete GPU team needs to execute and launch successful products, because failing to do so could spell an end to Intel's gaming GPU ambitions.

You can join the discussion on Intel reconsidering its gaming GPU plans on the OC3D Forums.

Dicehunter
I hope it doesn't shut down, The AMD/Nvidia duopoly desperately needs to be broken up, Lots of varied market competition is good, It drives advancement and keeps prices from shooting up to ridiculous levels we see currently.Quote

Warchild
I wonder how things would have been if 3DFX was never bought out and shutdown.

Even the intro logo was fascinating to watch

meuvoy
I honestly didn't think drivers would be such a massive undertaking, I guess Intel should have started by strengthening their integrated GPU drivers, delivering newer, better architectures there, and eventually when they had good driver and also already had a good architecture built around the iGPUs they just made the work to scale that into dGPUs... That would really turn out way better for them, people would probably be talking about how good the intel iGPUs had become already, and then Intel would drop a scaled up dGPU version of that, public opinion would skyrocket. But really I hope they keep it up now untill it's good and competitive. They sure have the means and the money to do so.Quote

Gothmoth
i think drivers is just part of the problem.


the massive delay and rumored refresh in 2023 points at a hardware problem too.