After years of teasers and teasers and hype-building, Intel has finally started to gear up for their long-awaited entry into the high-end graphics market. Today, Intel has revealed Arc, their brand name for the high-performance graphics segment, the brand which Intel will use to sell its future GPUs.

In Q1 2022, Intel will release its first Arc series graphics cards. This is when Intel will launch products based on their Alchemist architecture. Intel's Alchemist architecture was formerly known as DG2. Beyond Alchemist, Intel's GPU roadmap extends several generations ahead to cover new designs called Battlemage, Celestial and Druid, signalling Intel's plans to stay within the GPU market over the long term.

With a planned Q1 2022 launch, Intel will likely showcase its first Arc series products in detail at Computex 2022. Intel has already confirmed that their Alchemist architecture supports modern GPU features like Mesh Shading, Variable Rate Shading, Real-Time Ray tracing, and AI Accelerated Super Sampling. This means that Intel's ARC series products should be compliant with Microsoft's DirectX 12 Ultimate, which means that Intel is ready to challenge AMD and Nvidia within the GPU market.

In 2022, Intel plans to launch Arc series products for desktops and notebooks, adding a much-needed third option within today's GPU market. With both AMD and Nvidia graphics products being in short supply, it is good to know that Intel is ready to help meet the demands of gamers in 2022. 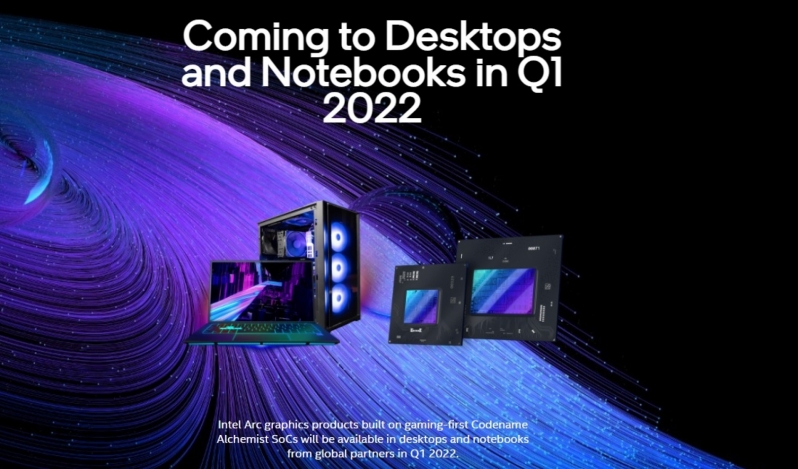 With the arrival of Intel's Arc series of products, 2022 will be an exciting year for the GPU market. AMD's Lisa Su has already confirmed that RDNA 3 based graphics cards will be released in 2022, which means that Intel will need to compete with current-generation and next-generation products as the year progresses. Do you think Intel has what it takes to challenge AMD and Nvidia within the GPU market?

You can join the discussion on Intel's plan to release ARC graphics products in early 2022 on the OC3D Forums.

demonking
I was hoping intels entry into this market was going to make things better for us all but with them stealing all the capacity for tsmc it's going to make availability even worse and not just on gpus.
We now have apple, amd, nvidia and Intel all fighting for tsmc's capacity and that doesn't include the smaller customers that are going to be screaming for capacity too, pricing and availability are not going to be going the right way for a long long time.Quote

ET3D
Quote:
Right. It doesn't matter how many companies are making the chips, as long as it's limited to TSMC there won't be any more chips.Quote

AngryGoldfish
I didn't know Intel have designed DG2 using TSMC's process nodes. I assumed they'd use their own. That's a real shame. That's kind of the reason why I was hoping in these cards.Quote
Reply