Does Intel have what it takes to gain mid-range GPU marketshare?

It looks like Intel has a strong RTX 3060 competitor

This week Intel has released a suite of benchmarks for its ARC A750 graphics card that compare it to Nvidia's popular RTX 3060, showcasing stronger performance (on average) across a suite of 49 titles, including 43 DirectX 12 games and 6 Vulkan games.

Intel's ARC A750, the gaming graphics card that Intel has primarily focused on, has the potential to shake up the mid-range GPU market, with Intel promising strong pricing that will make their product highly competitive with existing graphics cards within the performance bracket. That said, Intel has admitted (more info here) that they have a lot of work to do to optimise their drivers for games that use legacy APIs like DirectX 11, which continue to be used in many modern PC games. 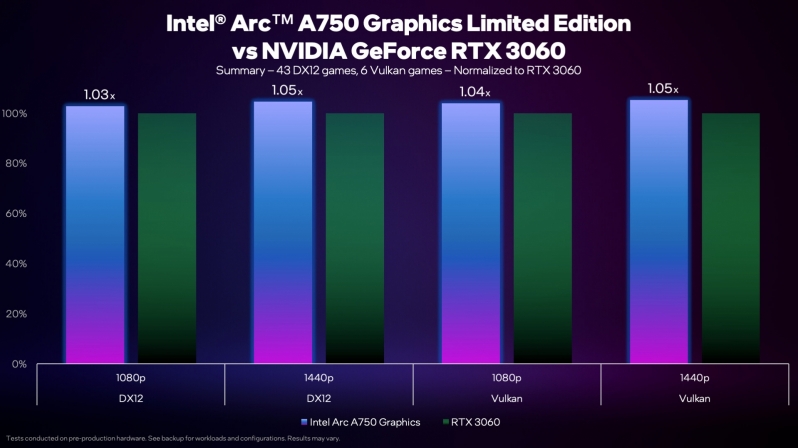 Like in many head-to-head benchmark comparisons, Nvidia's RTX 3060 and Intel's ARC A750 trade blows. That said, Intel's ARC A750 comes out on top more often than not, and it only gets better for Intel at 1440p. 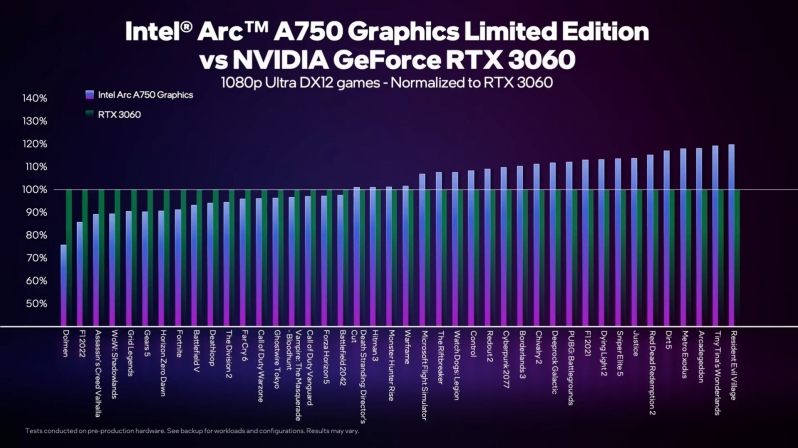 If Intel can offer gamers compelling pricing for their ARC series products and improve their drivers for legacy APIs, Intel has the potential to deliver some major competition into the mid-range GPU market. Having three competitors in this area should keep all parties working hard to deliver great products at reasonable prices, though it remains to be seen how much of an impact Intel's early ARC GPUs will have on the graphics card market. 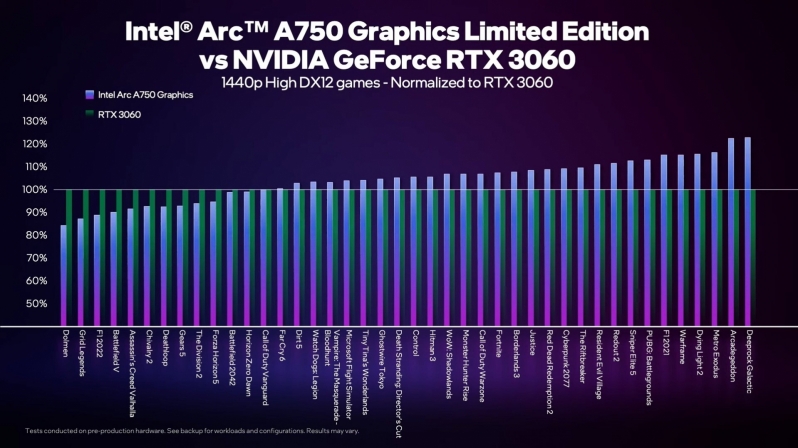 What's worth noting here is that Intel is not detailing the performance of any DirectX 11 games or any other games that utilise older graphics APIs. In essence, Intel is choosing to showcase benchmarking results that showcase their ARC A750 graphics card in a positive light. That said, we cannot fault Intel's selection of DirectX 12 and Vulkan titles in any major way.

Showcasing DirectX 11 performance would not be a good advertisement for Intel's ARC A-series of graphics cards, so don't expect Intel to publish such benchmarks in the future. In this regard, Intel is picking and choosing the data that they want to publish about their ARC A series of graphics cards. Every manufacturer does this to a certain extent, as all companies want to showcase their products in the best light. That being said, Intel is intentionally not showing gamers everything that they need to know about their ARC series graphics cards.

You can join the discussion on Intel's ARC A750 series GPU benchmarks on the OC3D Forums.

Gothmoth
does not matter as long as you can´t buy the card.


Quote:
curious to see what influence the ARC release has on the used market and ampere stock that needs to be sold before the next gen release.Quote

KingNosser
Well Idk who is going to buy it, not with drivers like they have atm, as much as i don't like nvidia i'd still rather a 3060 than one of these.

Where they went wrong is they are just too late to the market new cards on the way and better ones already out, they are really going to have to do better.

That or it'll just get shutdown cause i expect they have already sunk a lot into trying, they are just too late and imho are not ready to go full steam, so they have a mid range card but even Intel isn't going to want to stay in last place so just how much time and money is needed to get them where they want to be, could take a decade and a lot of money.Quote
Reply