Intel's integrated graphics can be best described as meh. They are not what anyone would call "gaming grade" and are only suitable for video decoding and other generalised desktop workloads.

In recent months the company have started to take PC graphics a lot more seriously, hiring Raja Koduri to lead their newly formed Core and Computing Division with plans to create discrete graphics solutions in the future. During the past quarter, Intel has also upped their driver game, delivering game specific updates at reasonably consistent intervals, but it is undeniable that the company has a long way to go before they can become a major competitor within the GPU market.

Today an Intel Ice Lake U-series CPU has been found on the SiSoftware Database, which contains a graphics unit that offers a total of 48 execution units, two times more than what is currently provided on the HD630 Gen 9.5 graphics chip that is included on Intel's i7 8700K.

The database lists the clock speed of this GPU at 600MHz, which is much lower than the maximum frequency of 1200MHz that the i7 8700K's integrated GPU can offer. This low clock speed can be forgiven due to the Ice Lake CPU's low TDP U-series configuration and the early state of Ice Lake silicon, though some have assumed that 600MHz is the GPU's base clock speed, despite the fact that other integrated graphics results don't list base clocks in their results pages. 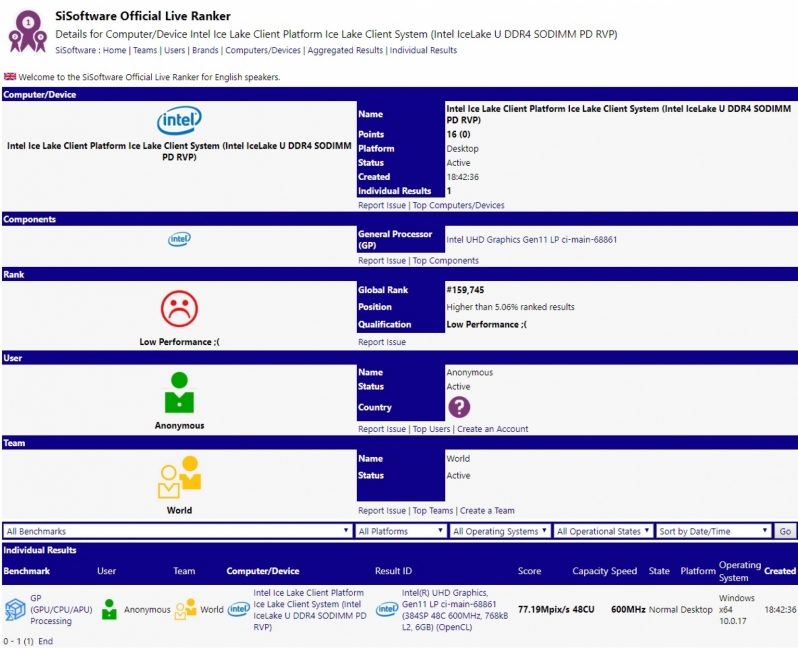 Other tidbits of information from this SiSoftware listing include the fact that this GPU has a 768kB L2 cache and can access 6GB of shared memory with a CPU. At this time it is unknown how Ice Lake's graphics will innovate over Intel's 9.5th Generation graphics within Kaby Lake and Coffee Lake, aside from the increase in execution units shown here. Will Intel be able to take on AMD in the integrated graphics space?

You can join the discussion on Intel's Ice Lake CPUs on the OC3D Forums.

NeverBackDown
So Intel users who rely on iGPU for mobile can now watch 4k/1440p60 youtube videos without stutter? Finally!

Wish my surface 3 could be updated... Would love to put a new CPU in it.Quote

Avet
All we needed is more horsepower under IHS. It doesn't matter anyway. First no one cares about intel IGP. They are good enough for the things that people use them for troubleshoot a GPU problem, and browsing the internet. Second they will throttle anyway if you don't delid them... So... No difference at all.Quote

NeverBackDown
Quote:
Um.. you do realize like 90% of people don't game and exclusively use the integrated graphics right? Not everybody is a gamer.Quote
Reply