Is Intel's custom GPU neither Polaris or Vega?

Over the past few days, Intel's Kaby Lake-G series of processors have been receiving a lot of flack due to its use of a semi-custom Radeon GPU design, silicon purchased from AMD to deliver gaming capable performance within small form factor PCs.

While it is undeniable that Kaby Lake-G offers a lot of CPU and GPU performance, what many have been calling into question is the fact that it is advertised as an Intel+Vega solution, when the GPU in question is more akin to Polaris than some may have expected.

Tom's Hardware has put these Kaby Lake-G rumours to the test to see if Kaby Lake-G makes use of AMD's new Vega GPU architecture, doing a little more than just checking how some programs make note the graphics processor. Some programs list the GPU as a Radeon Vega graphics chip while others consider it as a 4th Generation Polaris GPU, leading to the belief that this Semi-Custom offering may be more custom than advertised.

One of Vega's key feature is its use of Rapid Packed Math, a hardware feature that allows Vega to calculate two 16-bit floating point calculations in the same time it would take to complete a single 32-bit calculation. This feature can be used to accelerate some compute workloads, as can be seen in games like Far Cry 5 and Wolfenstein 2: The New Colossus.

In Tom's Hardware's testing, they found that the "Vega M GH" GPU found within Intel's Kaby Lake-G was not able to accelerate a DirectX 11 FP16 workload like other Vega GPU offerings, confirming that the GPU lacks a feature which AMD calls Vega specific.

While it is possible that this feature is merely inactive in Intel's GPU driver stack, it is also likely that Intel's custom chip uses IP from both Polaris and Vega, rather than conforming to one architecture or the other. This will make Intel's custom GPU design similar to the chip used in today's AMD powered consoles, using IP from various parts of the Radeon GPU roadmap. 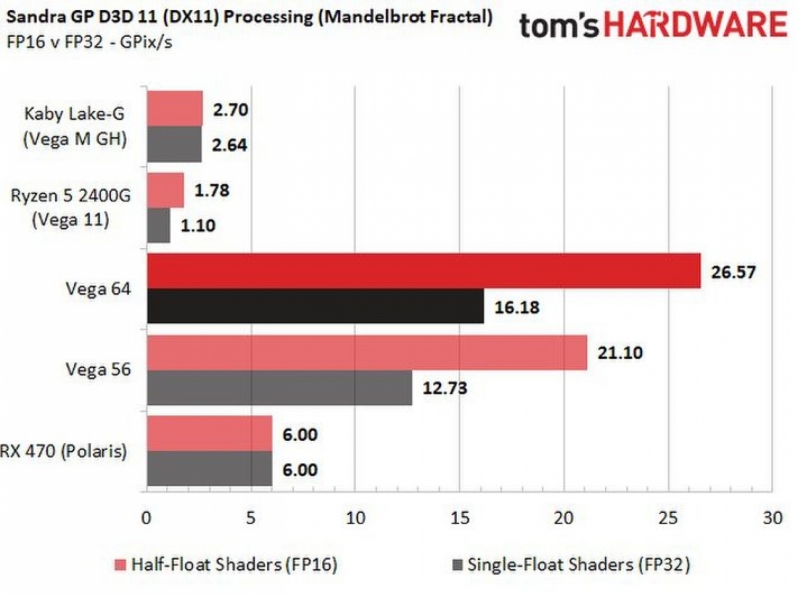 Intel has released the following statement to both PC World and Tom's Hardware, stating that their custom GPU is similar to AMD's Radeon RX Vega, using HBM2 memory with additional ROPs and "enhanced compute units".

This is a custom Radeon graphics solution built for Intel. It is similar to the desktop Radeon RX Vega solution with a high bandwidth memory cache controller and enhanced compute units with additional ROPs.

Both Intel and AMD seem to agree that the custom GPU used with Kaby Lake-G is similar enough to Vega to justify its marketing, though the lack of Rapid Packed Math/FP16 compute acceleration will undoubtedly lead to many calling Intel's custom silicon "Polaris in disguise".

At the end of the day, only two games make use of Rapid Packed Math, which means that the lack of this Vega-specific feature will have a minimal effect on the Kaby Lake-G gaming experience, though it would have been nice for both Intel and AMD to have been clearer with their marketing.

You can join the discussion on Intel's custom Kaby Lake-G GPU lacking support for specific Vega features on the OC3D Forums.