Integrated graphics that are good enough for 1080p gaming

It wasn't long ago that Intel Graphics were seen as anything more than a joke. Yes, they did a great job handling multimedia workloads, but when it came to gaming, they left a lot to be desired.

With Tiger Lake, things have changed. Not only have Intel's integrated graphics improved with Xe, they are now strong enough for 1080p gaming, even if they sit below the "glorious 60 FPS" standard that many PC gamers strictly adhere to.

Intel has made several lofty claims with Tiger Lake, and one of them is that they have surpassed AMD within the realms of integrated graphics. Intel has claimed that the can deliver stronger gaming performance than AMD's Ryzen processors and offer 100+ FPS framerates in popular free-to-play titles like DOTA 2, CS:GO, Valorant and League of Legends. 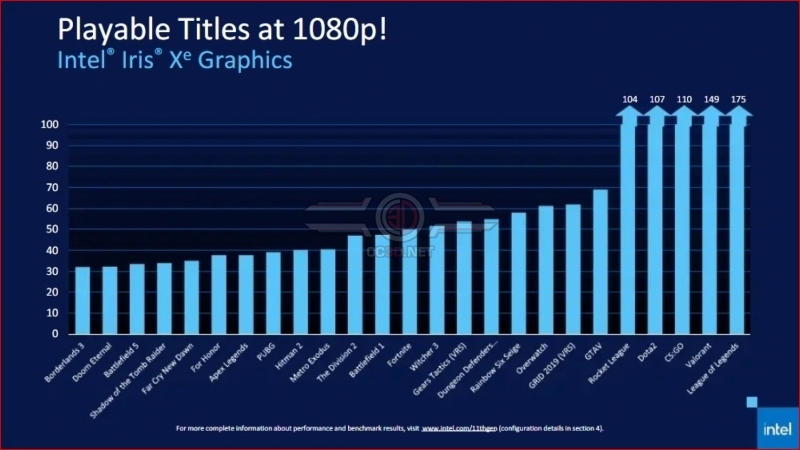 When compared to the company's Ice Lake processors, Intel's Tiger Lake designs promise performance increases of up to 100%, revealing an impressive generational leap from the blue team.

Intel is working to enter the discrete graphics market, and these efforts have started from the bottom. With their new Xe architecture, Intel is delivering significant performance gains over the company's older 11th generation graphics. These gains come from three aspects, higher EU (execution unit) counts, architectural advancements and higher frequencies. All of these changes add up to deliver impressive gains. 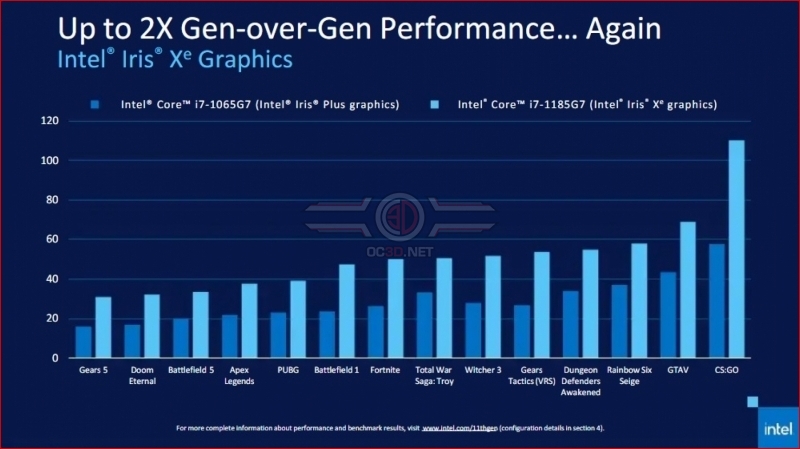 With Iris Xe, it is clear that Intel isn't targeting the gaming market exclusively. Today's gamers have no need for features like INT8 compute. Intel's iGPUrefinements target a wide range of applications, from AI to multimedia processing. Regardless, these gains are making Intel more competitive, so much so that Intel now claims to be the world's leader when it comes to integrated graphics. 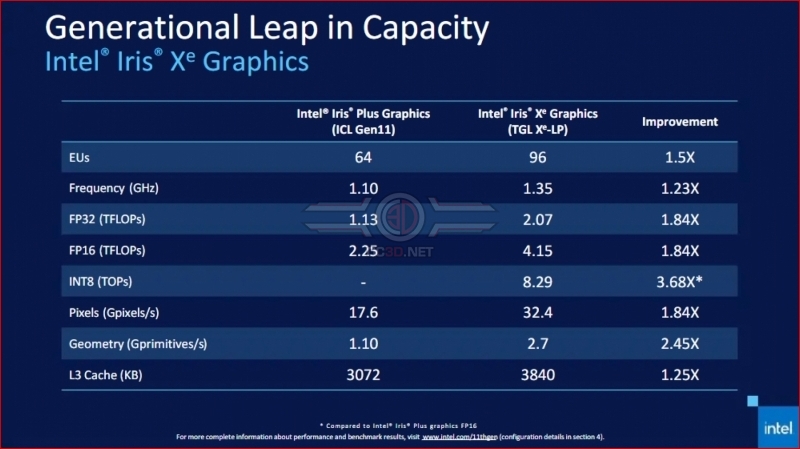 When compared to AMD's Ryzen 7 4800U, Intel has claimed to offer up to an 82% performance advantage, though much of these gains come thanks to Intel's support for Variable Rate Shading (VRS), a feature that's present in both GRID 2019 and Gears Tactics.

We will also note that Intel has not compared all of the titles that Intel tested in the above Intel 10th Gen VS Intel 11th Gen comparison. One has to wonder if Intel has cherry-picked these results to look better in the eyes of gamers. That said, it is impressive that Intel is beating AMD in the first place. Intel's integrated graphics have clearly evolved over the past few hardware generations. 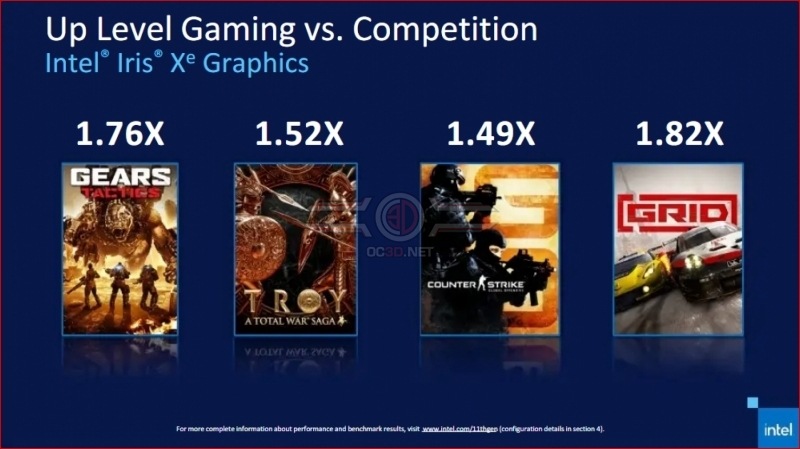 While we will need to wait for 3rd party benchmarks to confirm Intel's claims, it is evident that Intel has become a valid competitor within the gaming market. Yes, these are integrated graphics, but they are nonetheless gaming-capable products.

If you want to play older PC titles or modern games at non-Ultra settings, integrated graphics can now deliver a decent gaming experience. While these performance levels won't compare well gaming-oriented discrete graphics cards, Intel's integrated graphics are now more than good enough to play games like Skyrim on the go without much hassle. 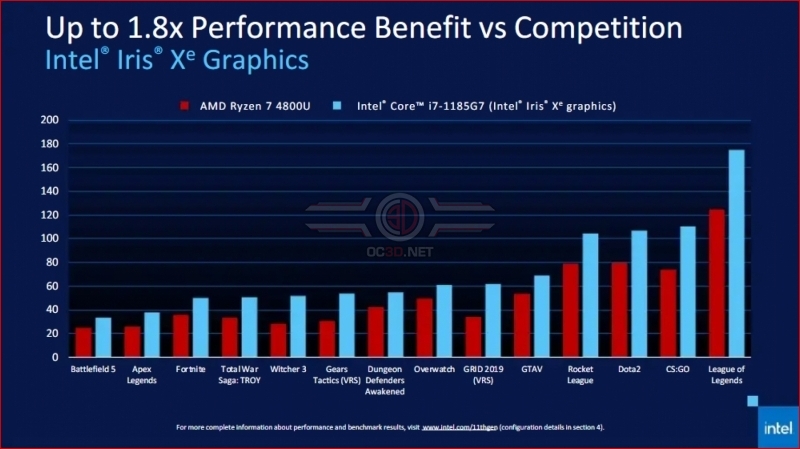 Intel has also compared its Iris Xe graphics to Nvidia's Entry-Level MX350 graphics cards, highlighting that they can now trade blows with discrete graphics. I will note again that Intel is using different games than their AMD and last-generation Intel comparisons, suggesting that Intel has deliberately chosen these results for their comparisons.

Regardless, it is clear that Intel's integrated graphics have come a long way since the company's gaming ambitions became clear. It will be exciting to see what Intel's future iGPUs have in store for us.

Intel's integrated graphics are no longer the joke they once were, but more evolution is needed to make integrated graphics more widely accepted by gamers. With results like this, Intel's discrete gaming GPU efforts should not be written off, even with the launch of Ampere on the horizon. 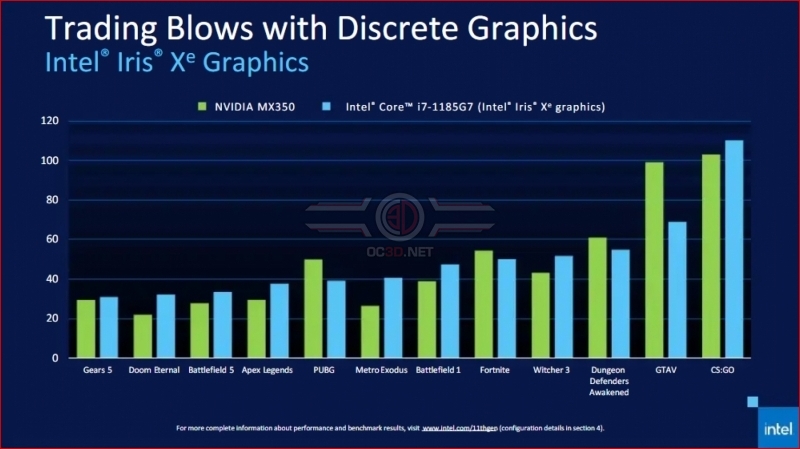 Before closing, we will note that these comparisons all came from Intel, and use Intel's Tiger Lake flagship i7-1185G7 processor in favourable running conditions.

If you can handle 30 FPS framerates, or perhaps some sub-1080p resolutions, you could even enjoy some time playing The Witcher 3 or other modern AAA titles. While that may not seem impressive, remember that Nintendo Switch and the Xbox One often play games at these resolutions/framerates. Integrated graphics are no longer a joke for PC gamers.

You can join the discussion on Intel's Tiger Lake/Xe integrated graphics performance on the OC3D Forums.