Today, Intel has officially revealed their ARC A750 graphics card, showcasing performance levels that are up to 17% higher than Nvidia's RTX 3060 graphics card.

With their ARC A750, Intel claims that they can deliver performance levels that are higher than other GPUs in its product segment, which should mean that Intel is planning to offer gamers more performance per pound (or Dollar) than their competitors. Even so, Intel's Ryan Shrout has noted that "the performance of ARC won't look like this in all games". It is likely that AMD and/or Nvidia can beat Intel in specific games or workloads.

Below, Intel has showcased performance data from Cyberpunk 2077, Control, F1 2021, Borderlands 3, and Fortnite, games where Intel's ARC A750 can best Nvidia's RTX 3060. Performance advantages of 6-17% are shown, which is an impressive result from Intel. 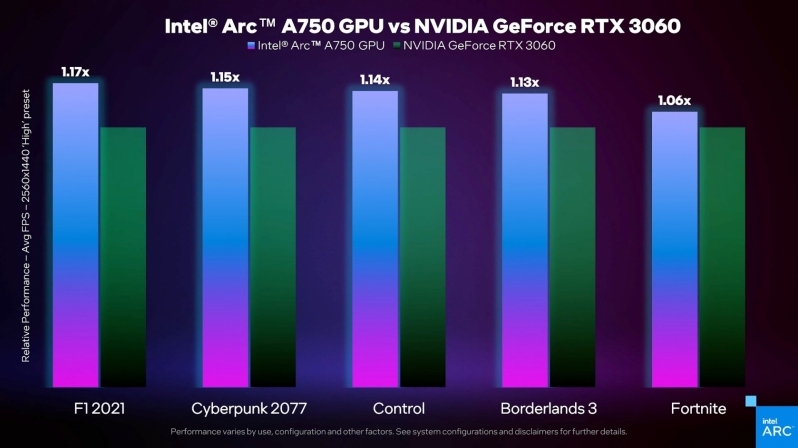 In the video showcase below, Intel showcased a "Limited Edition" ARC A750 graphics card, which Intel used to obtain the performance data shown above. Intel has not revealed any specifications for their ARC A750 officially, though the GPU is expected to feature 24 Xe cores and 12GB of GDDR6 memory.

You can join the discussion on Intel's ARC A750 showcase on the OC3D Forums.

Piskeante
RTX 3060 like performance, for the same price.
GG Intel.Quote

NeverBackDown
That's pretty impressive considering where they started from... Idk why you think its a GG?Quote

AlienALX
I think it's fine. This isn't even the top card. Top card should be at least as good as a 3070 and people are all upset LOL.

From what I have seen there are things that these cards will destroy AMD on and easily compete with Nvidia. Not gaming, but something to do with encoding? IDK, can't really remember.

This is just the beginning. The cards touted for next year are different beasts entirely.

BTW dude I have absolutely no idea where you got the price from, as I haven't seen them mention that anywhere. It may be in the video? god knows.

The card already released is faster than the 6400 and costs less. So this should be pretty darn affordable.

Edit 2. OK yeah, apparently it is going to be $329 from rumours. For 17% more performance and you are complaining?Quote

Gothmoth
i have yet to see how these cards behave with cad, 3D software etc.

given my past experience with AMD i am not willing to buy an entirely new intel GPU that has known driver issues.


as someone who uses his GPUs for work, not gaming, nvidia is still the best choice.
and i say that while despising the company.


ARC game performance/consistency seem to be heavily dependent on the API used.
i read about horrible DX9-DX11 perfomance in some titles.Quote
Reply