So much for seeing ARC launch this summer...

Intel Arc GPUs are scheduled for release later this year, with, as Ryan explained, “lots of Game On driver updates, with launch-day support for the biggest titles, and ongoing improvements for older games, too.” For more information on Intel Arc graphics, go to arc.intel.com, Ryan’s Twitter, or the Intel Insiders Discord. When available, the Intel Arc cards can be purchased through various retailers and PC-builders globally, as well as directly via the Intel store. 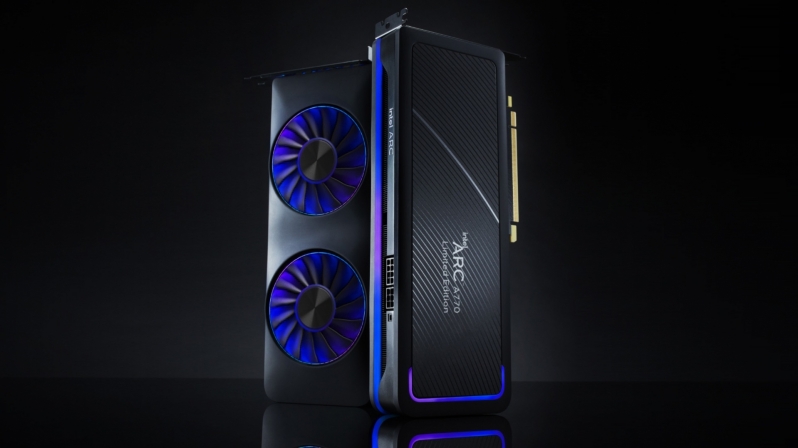 Intel's ARC A770 is the company's flagship ARC A-series graphics card, offering users fully enabled ARC Alchemist silicon with 32 Xe cores and 16GB of GDDR6 memory. With their Limited Edition ARC A770 design, Intel will be offering their customers a matte black graphics card with RGB lighting and chrome accents. Otherwise, the graphics card looks a lot like their already revealed ARC A750 graphics card.

For Arc’s first venture into the world of high performance gaming graphics, Ryan and his team wanted to “make a serious statement.” The A750 and A770 Limited Edition cards are primed to do just that. “[These cards] are a svelte matte black with a full-length cosmetic backplate, and even minor details like the I/O bracket are matte black for a cohesive look. The higher performance A770 has chrome accents running around the outside and top for some extra flash. When the cards are powered on, the edge and the fan ducts diffuse addressable RGB LEDs for a smooth, high-quality light effect.”

Intel's ARC A-series GPU launch is already behind schedule, so much so that it has become a meme amongst many PC enthusiast communities. Intel told us that their XeSS technology would launch in "early Summer", now its August... To say the least, Intel was expected to release their ARC A-series GPUs long before now.

You can join the discussion on Intel's ARC A770 Limited Edition graphics card design on the OC3D Forums.

No one gives a s**t what it looks like if the drivers are hot sweaty balls.Quote

Avet
Well AMD drivers were bad for a decade and people still bought the cards. And Intel has some of the best programmers in the world. They will sort it out at some point. And the AV1 encoder will sell them millions of cards just to streamers instantly.Quote

meuvoy
Quote:
I don't think AMD drivers got nearly as bad as Intel Arc drivers are RN at any point in time, like take the worst AMD driver release, it's still several orders of magnitude best than intel drivers are RN.Quote

m2geek
I kinda feel sorry for the people who get these and Intel can't get the drivers right. Especially if Intel think they can change AMD/Nvidia money for their cards.Quote

Bagpuss
From the very first moment Intel announced their intention to enter the discrete GPU market with these cards, I was on here saying that they'd likely come up with decent hardware but would be crippled by their inability to produce decent drivers to support them.


...and guess what 🙄Quote
Reply