Is this Intel's ARC Alchemist A770?

At this time, Intel has not revealed when their ARC Alchemist series graphics cards will be available to desktop users, or how well these graphics cards will perform when compared to current-generation Nvidia RTX 30 series and AMD RX 6000 series products. Intel is launching their ARC Alchemist series products into the notebook market first, and there are fears that Intel will be launching their desktop models too close to the reveal or launch of next-generation AMD and Nvidia products to have a dramatic impact on the GPU market. 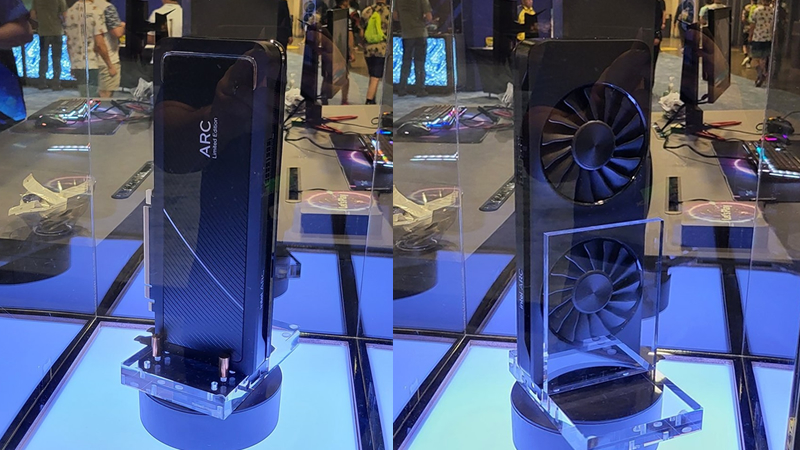 You can join the discussion on Intel's ARC Alchemist Limited Edition GPU on the OC3D Forums.

Dicehunter
Quote:
6700XT performance for $399 along with stable drivers and they'll be onto a winner, If it's any higher in price though I doubt many would be willing to take the plunge.Quote

AngryGoldfish
Yeah, I agree. If they brought these out a year ago, that would have been incredible even at $450. But now with new cards on the horizon, prices dropping on AMD/Nvidia cards, and the worry of drivers and support from game developers, I worry these are going to be mobile-only.Quote

KingNosser
The drivers are less of an issue than the price they will want, Intel have a huge software teams so drivers i'd expect on point, but it's their first real attempt i think the delays are more about them knowing it needs to be right or they are done.

I do however just feel they are too late now as like everyone knows new cards are only months away why would you buy into a new brand and knowing it'll be underpowered quickly, I'd not buy any card atm let alone a first attempt.

But maybe datacenter and laptop is more their focus and so they at least get something out the door.

update
PC gamer posted some benchmark results, very unimpressed, no one in their right mind will buy these.Quote

AlienALX
All depends how well they run PUBG for me.Quote
Reply