Thanks to fresh leaks from the YouTuber Moore's Law is Dead; we now have fresh information regarding Intel's planned Xe-HPG graphics card, including images of an alleged engineering sample.

Xe-HPG's launch should be in Q4 2021, giving Intel plenty of time to develop strong drivers and an ample GPU supply. Intel is reportedly working on a competitor to Nvidia's DLSS feature, using the internal name XeSS. 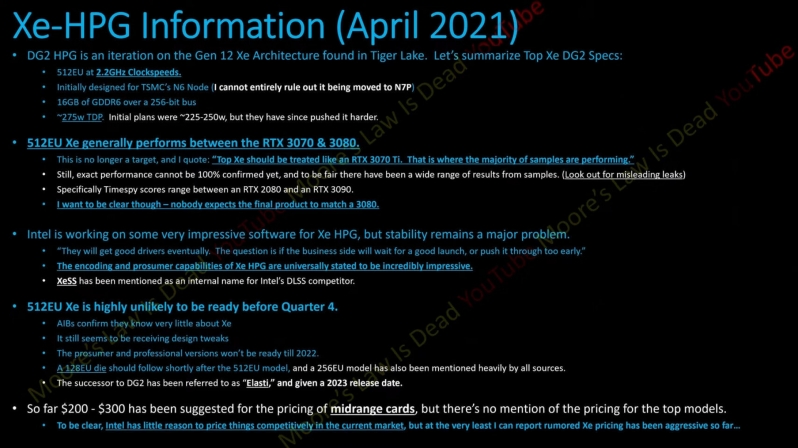 You can join the discussion on Intel's Xe-HPG discrete graphics card on the OC3D Forums.

Dicehunter
If this is true and it comes in at a decent price it's good for everyone, Well mainly scalpers, Price gouging retailers and miners, The rest of us will still be waiting multiple years for a GPU.Quote

Damien c
I will be waiting to see reviews and seeing what the drivers and game support is like.Quote

AngryGoldfish
I think it's gonna be awesome if Intel can make this work. The significance of having a third player in the GPU market is very exciting to me.Quote

AlienALX
Great thing is Intel have their own fabs, so never have to rely on any one else.

I hope this isn't some sort of sick prank.Quote

AngryGoldfish
Quote:
If it is, Moore's Law Is Dead will have to start admitting he didn't get something right, which is the opposite of what he likes to do. I don't think I've ever watched a video of his where he hasn't reminded everyone how right his leaks always are. He aims this at his naysayers, which I'm not one of as I think his content is good, but I have to listen to his gloating still.Quote
Reply