KFA2's GT 1030 EXOC has been pictured, revealing the specification of Nvidia's new low-power GPU. This new GPU is intended to playback multimedia content and play simple games, acting as an iGPU replacement which comes with a sub-£100 pricepoint.
This new GPU is rumoured to be made using TSMC's 16nm manufacturing process and now 14nm like the GTX 1050 and 1050Ti, coming with a super-low CUDA core count of 384 and a mere 64-bit memory bus. This will allow the GT 1030 a very small die size, giving this GPU a 30W TDP and a low cost of manufacture.

The KFA2 model shown below will have a single HDMI 2.0b port and a single DVI-D port, coming with a single-slot, half-height PCIe form factor. 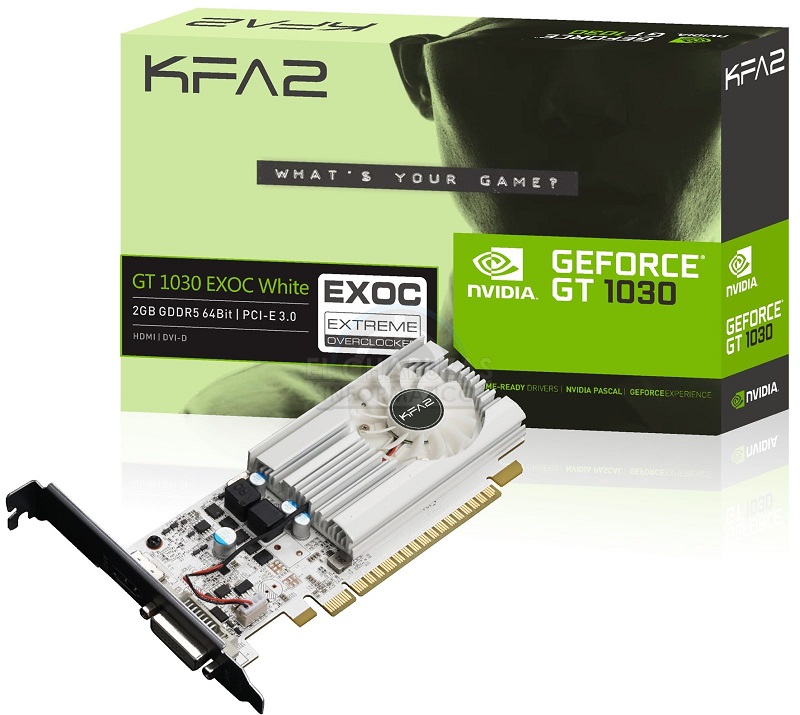 The GT 1030 is expected to launch with a price of around £80, though this has not been confirmed officially by Nvidia.

You can join the discussion on KFA2's GT 1030 EXOC on the OC3D Forums.

AlienALX
Quote:
lmao ! I was thinking exactly the same thing !

"FFS what is the point in making this card all in white and making it look nice when at the end of the day it's a piece of garbage".Quote

WYP
Quote:
I hear that they are adding 4K Netflix support to their drivers and are planning to better support 4K content playback, so perhaps this will have a good home in HTPCs.Quote
Reply