Today, a slide has leaked online showcasing Intel's alleged performance targets for their DG2 graphics lineup, revealing that their flagship "SOC1" design should draw between 175W and 220W under full load and deliver performance levels that are competitive with AMD's RX 6700 XT and Nvidia's RTX 3070.

Sadly, if this slide is legitimate, Intel's first ARC series graphics cards will not be competing with AMD and Nvidia within the ultra-high-end GPU market. This means that Intel will only be competing with Sub-$500 (MSRP) products from their competitors.

With power draws of up to 220W and competitive performance levels with AMD's RX 6700 XT and Nvidia's RTX 3070, it looks like Intel can deliver similar levels of performance per watt as their competitors. This is a good sign for Intel's ARC Alchemist architecture. Should Intel be able to scale performance upwards with future GPU iterations, there is little reason to believe that Intel can't compete with AMD and Nvidia moving forward.

Intel's SOC2 DG2 GPU is said to consume around 75 watts of power. This GPU is designed for the low-end GPU market, with Nvidia's GTX 1650 Super being seen as a competitor. This graphics card will likely become a focus for Intel's "All-Intel" gaming laptop ambitions, offering consumers a balance between power draw, performance and pricing. With their SOC2 chip, Intel wants to take some of Nvidia's laptop GPU market share. 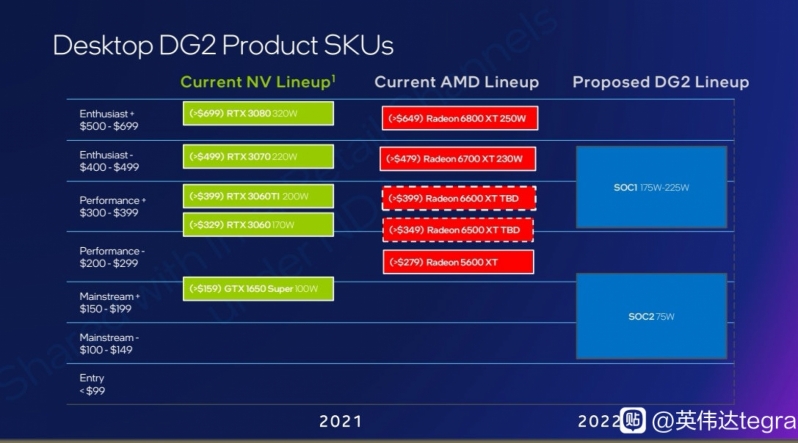 While we are happy to see Intel enter the GPU market, it is a shame that most leaks have claimed that the company's upcoming ARC Alchemist series GPUs will be unable to dethrone any of AMD or Nvidia's current high-end offerings. Both AMD and Nvidia are reportedly working on next-generation graphics cards with late 2022 launch dates, and those products will likely place Intel further behind.

In today's market, any well-priced graphics card will sell. There is a lot of demand and too little supply from AMD, Nvidia and their partners. If Intel prices their ARC Alchemist GPUs well, they will sell like hotcakes. That's a guarantee.

In a world where AMD and Nvidia GPUs are rarely available at MSRP pricing, all Intel needs to do to succeed is release a product at a sane price. That's it. Assuming that Intel's GPU drivers are on point and their product deliver competitive performance levels, Intel's ARC Alchemist series GPUs will sell. As much brand loyalty as some consumers have for AMD and Nvidia, more than enough people will buy from Intel to finally be able to place a newer graphics card in their systems.

You can join the discussion on Intel's leaked ARC Alchemist GPU product lineup leak on the OC3D Forums. 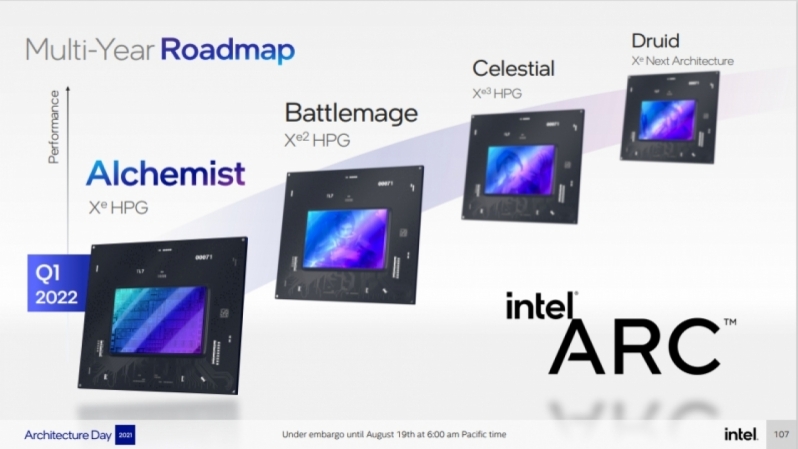 NeverBackDown
Intel need to make sure drivers work above all else with timely releases. Performance can be great but it won't matter if it's a buggy mess.Quote

KingNosser
This will be Intels biggest issue will be drivers, they also need to get future product out faster as well otherwise they won't be able to keep up by the time it all comes out they are already a year behind, let alone the coming amd nvidia cards that won't be far away.

tbh i think Intel can do well in the longer term but i'm less sure the uptake will be what they are hoping for.Quote

AngryGoldfish
I don't think a flagship competitor is necessary at this stage. The 6700XT/3070 class is the perfect sweet spot for high-end gaming. Most people have 1440p monitors or will be upgrading to one at some point soon, and that tier of GPU is the ideal accompaniment for that. The TDP is also the ideal sweet spot.Quote

Dawelio
Quote:
Even for high refresh rate gaming at that resolution?...Quote

m2geek
With their track record of Drivers. There is no way I'd ever buy an Intel d-GPU until they can PROVE they're going to commit the necessary resources to drivers *REGULARLY* and I don't mean just tri-monthly updates as a "best case"Quote
Reply