Intel's ARC Alchemist GPUs will have plenty of VRAM

Intel's got a 16GB GPU on the horizon

Thanks to @9550pro on Twitter, we have been able to look at a leaked Intel slide that details the memory configurations of multiple laptop-oriented DG2 SKUs. These five SKUs will feature between 4GB and 16GB of GDDR6 memory, and between 96 and 512 execution units.

Intel's high-end SKU1 model will feature 16GB of 16Gbps GDDR6 memory over a 256-bit memory bus, making this graphics card similar to AMD's Radeon RX 6800, at least in terms of its memory configuration. Intel also has a 12GB SKU2 model, which features 384 execution units. Below that, we also have an 8GB SKU3 model with 8GB of VRAM over a 128-bit memory bus.

On the low-end Intel has their SKU4 and SKU5 models with 128/96EU configurations, a 64-bit memory bus and 4GB of 14Gbps GDDR6 memory. When looking at the memory configuration of these graphics cards, we can only compare these graphics cards to AMD's Radeon RX 6500 XT. That said, these are mobile-focused solutions from Intel that feature slower GDDR6X memory and no Infinity Cache. That said, we expect these SKUs to feature video encoders/decoders, as Intel has already heavily marketed the video editing performance of their ARC series discrete graphics cards. 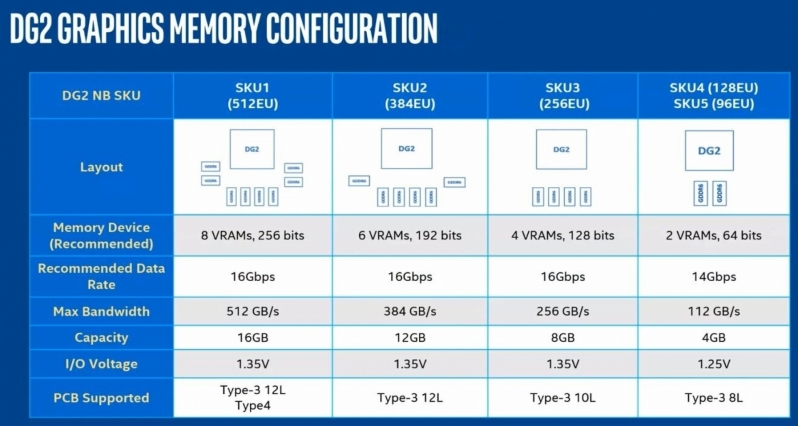 With 16GB of GDDR6 memory over a 256-bit memory bus, we expect Intel's SKU1 desktop equivalent to deliver performance levels that are competitive with Nvidia's RTX 3070 Ti and AMD's Radeon RX 6800. Without faster GDDR6 memory or an equivalent to AMD's Infinity Cache technology, we do not see Intel's upcoming ARC Alchemist series GPUs delivering the same performance as with higher-end Radeon RX and Geforce RTX GPU models from AMD or Nvidia.

You can join the discussion on Intel's ARC Alchemist series graphics cards on the OC3D Forums.

AlienALX
Saw a thing yesterday where they were talking to Raja. He said that Intel just wanted adoption and support. IE, the more people who have an Intel card the more game makers will support them going forward etc. It was suggested that they would sell their GPUs at very low profit margins or even a loss to gain that adoption.

It was a similar thing he tried to do at AMD. Well, not tried to, Polaris did indeed gain AMD a much bigger market share than before, but AMD have let that go since.

Very excited about all of this. Really does feel like a nice waft of fresh air.Quote

dazbobaby
Quote:
Can't happen soon enough. The news around Nvidia is all bad at the moment. AMD not much better, so we need more GPU contenders to even things out.Quote

AlienALX
Quote:
I don't think AMD will weather this. I really don't. It's been clear for years that they simply don't really care. This is even more evident now, where they are charging Nvidia money for GPUs that carry hardly any of the technology that caused Nvidia to ramp up their prices.

They can not compete with Intel. At all. Even if they got close in performance terms (or even better) it doesn't matter. When you compete with a company you need to do it all the way through, and AMD just don't have the budget to do so.

Said it before the other day but may have been elsewhere... They got lucky with Ryzen. Very, very lucky. I mean it was great but Intel had a run of really terrible problems. Had they not? AMD would probably still be the cheaper brand tbh.

They won't get any luck in the GPU department. Nvidia and Intel have budgets they could only dream about. So whether they will continue to bother or just make APUs? IDK. Only one company can take on Nvidia at hype, marketing and share and that's Intel.

We will no doubt create another monster. However, the creation of it is where we will get decent deals and etc.

Now what I would love to see from Intel are really good APUs. Like, maybe a larger chip on its own chipset and board that has some real clout. IDK if AMD purposely hamstring their own APUs because of deals with Sony and M$ (I would strongly imagine so tbh) but yeah, I would like to see an all in one deal that can actually play games really well and not just barely.

Intel really won't have any of those constraints.Quote

KingNosser
Intel are a year and a half behind, by the time these are out Nvidia and AMD are almost ready to go into the next gen leaving these behind.

I get your points but i don't fully agree, only time will tell if Intel really gain back ground and atm while they may get sales and invigorate the market, they are behind all the same.Quote

Dicehunter
Quote:
I expect AMD to continue doing well in the rasterisation arena but also continue to be behind when it comes to features such as AI upscaling and RT, Both of which are now making some really nice visual differences in games especially DLSS 2.3+.Quote
Reply