LG has just revealed their OLED EX screen technology, a proprietary evolution of traditional OLED technology that promises users greater levels of colour accuracy and up to 30% more screen brightness.

So what is OLED EX? The OLED part stands for Organic Light-Emitting Diode, like all OLED screens, and the EX stands for "Evolution" and "eXperience". Yes, this acronym makes little sense, but as far as consumers are concerned, EX represents the superiority of LG's latest OLED screens. With EX, LG's trying to give users of their older OLED screens a reason to upgrade their displays.

One of the disadvantages of OLED screens when compared to high-end HDR compatible LED-based screens is that their maximum brightness levels are limited. With OLED EX, LG's addressing this issue. Beyond that, the increased accuracy of OLED EX delivers enhanced colours and delivers finer details.

With OLED EX, LG has made two major changes to its OLED technology. Firstly, LG uses deuterium within their OLED panels instead of standard hydrogen. While we do not know how this altered chemical makeup changes the characteristics of LG's OLED technology, it is seemingly responsible for OLED's EX's improved performance.

The second major change with OLED EX is LG's algorithmic image processing, which is used to more precisely control the energy use of their latest screens and more accurately express the details and colour of images that are being displayed. With more fine grain power control and improved OLED diodes, LG's OLED EX screens are able to offer users higher brightness levels and increased screen accuracy, both of which are significant upgrades.

Aside from LG's OLED panel technology changes, LG's OLED EX displays also offer thinner bezels, with their 65-inch OLED EX model cutting down the 6 mm bezel sizes of its predecessor down to 4 mm. That's a 33% reduction in bezel size. 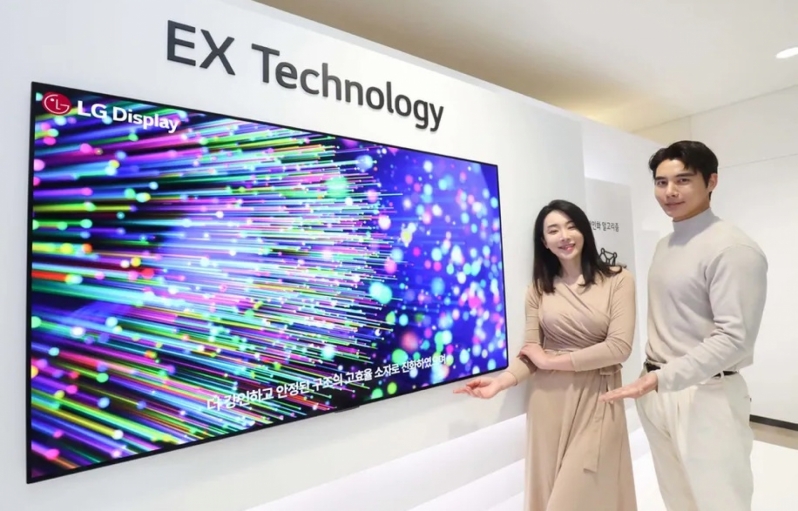 In Q2 2022, LG's OLED EX screens will be used in all OLED displays that are produced within the company's Paju (South Korea) and Guangzhou (China) production facilities.

You can join the discussion on LG's OLED EX display technology on the OC3D Forums.

meuvoy
It's nice they're adressing brightness, I definitely fell the lack of punch at times when there's a lot of bright objects in an HDR scene, especially open world games the Sun just ends up not looking that bright because of Averge Picture Brightness control. But quick flashes like thunder look great!

That said I just finally bought my OLED on Black friday and I am a little bit disappointed I missed this advancement by a matter of a few months. Really wasnt expecting a new OLED panel right the next year after OLED EVO came to the market.Quote

WYP
Quote:
I wouldn't say that you have missed this by a few months. While OLED EX will be shown at CES, it will not be on the market next month. The full transition to OLED EX production will be in Q2 2022, which means that these screens will not be widely available for a while.

You can only ever buy what's available today. There will always be something better later. The same applies to CPUs, GPUs, and all other components.Quote

Dawelio
Quote:
Quote:
Do also keep in mind that on top of this is logistics, pandemic and not to mention pricing.

I'd say enjoy your new TV for as long as it can possibly serve you, the money spent on this fresh new tech is something you will probably not notice after a while due to gotten used to it, but your wallet will probably feel a lot lighter after it

NeverBackDown
Hopefully this makes older models less expensive when it comes out as I'll be needing a living room TV soon... I can waitQuote
Reply