Intel's XeSS technology utilises beep learning to synthesize images that are close to the quality of natively high-resolution rendering. Better still, this technology will not be Intel-exclusive, allowing graphics hardware from Intel's competitors to benefit from XeSS.

Why do we need Image upscaling/reconstruction technologies?

Rendering games at high resolutions/refresh rates is hard. Every bump in resolution requires a dramatic increase in GPU performance, so much so that game developers and hardware manufacturers are working on clever ways to deliver higher-resolution gameplay without the insane hardware requirements of native resolution rendering.

As gaming continues to enter the 4K era and slowly move to ever-higher screen resolutions, reconstruction and AI enhancement techniques are quickly growing in popularity as a method for game developers and hardware manufacturers to deliver ultra-high resolution gameplay experiences.

Nvidia has created Deep Learning Super Sampling (DLSS), AMD has FidelityFX Super Resolution (FSR), and Intel has XeSS (Xe Super Sampling). All of these solutions are designed to do the same thing, deliver higher resolution gaming experiences at a lower performance cost.

There is an image quality/performance trade-off when gaming, and with XeSS, Intel wants to deliver the best of both worlds.

While Intel plans to release early iterations of XeSS to developers and engine makers for direct software integrations, the company has confirmed that they plan to open-source XeSS when the technology matures.

Intel plans to release an XMX compatible SDK for XeSS this month and a more broadly compatible version of DP4a instruction support later this year. 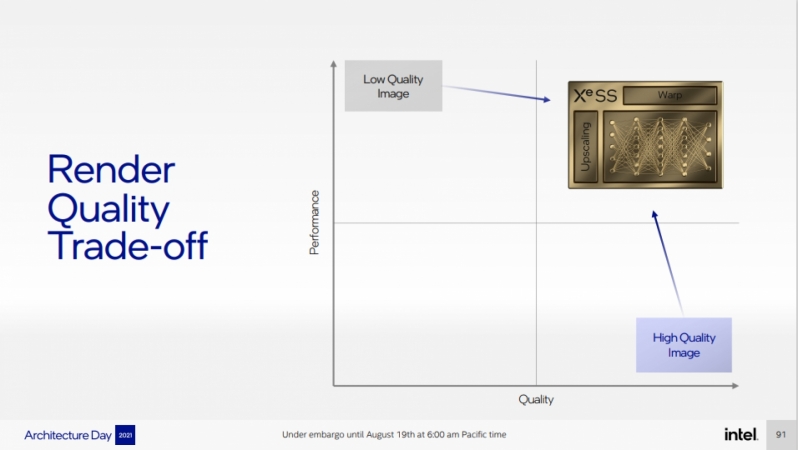 With XeSS, Intel can reconstruct images using a neural network to deliver high-performance gaming with high levels of image quality. In Intel Xe graphics cards, these calculations can be done using XMX AI instructions, while DP4a instructions can be used on competing hardware. Intel promises up to a 2x performance boost and comparable levels of image quality when using XeSS.

Sadly, we were not given access to Intel's high-resolution video demo for XeSS, so we cannot comment on the image quality of Intel's upscaling solution. Intel has confirmed that they plan to release an SDK for XeSS later this month with an XMX implementation. A more broadly compatible version with DP4a instruction support will be launched later this year. 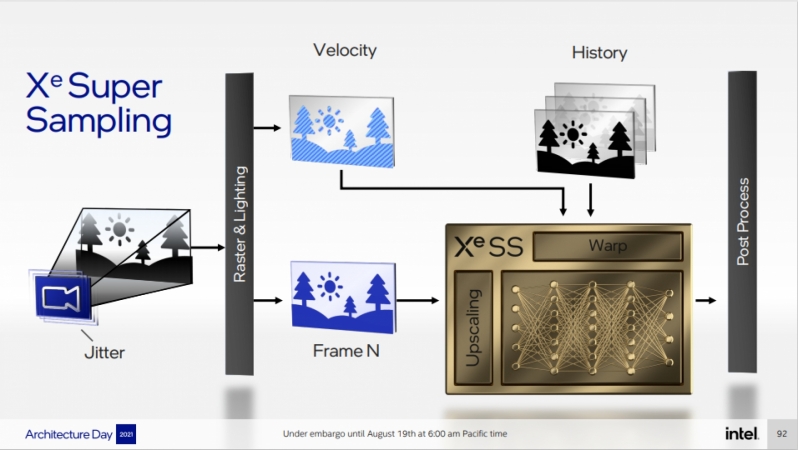 Performance-wise, Intel claims that they can deliver gamers an up to 2x increase in framerate at 4K while achieving comparable to native levels of image quality. XeSS will perform best with hardware that supports XMX instructions, though DP4a compatible hardware will still be able to achieve significant performance boosts.

Intel has stated that DP4a instructions are supported by a "broad set of hardware, " including integrated graphics. 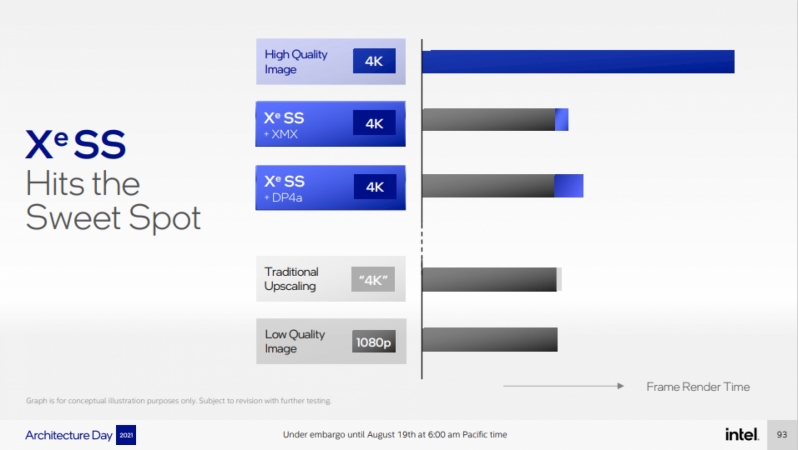 You can join the discussion on Intel's XeSS SuperSampling technology on the OC3D Forums. 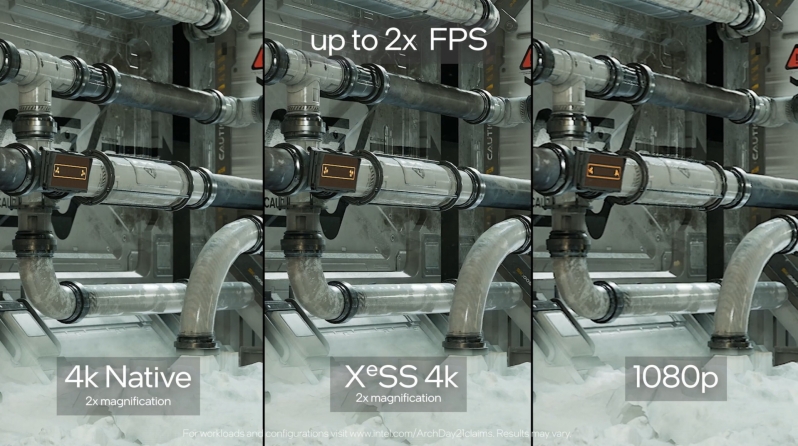 Dicehunter
Considering both AMD's FSR and Intels XeSS are hardware agnostic and from everything we've seen give an image that is comparable to Nvidia's DLSS... Nvidia are going to have to come up with a very good reason as to why DLSS needs their hardware to function going forward.Quote

AngryGoldfish
Quote:
I think Nvidia are going to be fine with it. That's obviously just my opinion, but when I see the progress Nvidia has made with DLSS and how it has been implemented into so many large games successfully, and given how huge of a company Nvidia is, I think DLSS is here to stay. I don't even think it'll go the way of Gsync. I think it'll more successful and integrated into the PC gaming space. Again, just my opinion. No real evidence to back it up; just a hunch. Also, FSR isn't a runaway success at this time, and Intel's XeSS is a long way off.Quote

looz
Quote:
Obviously marketing material is going to be in a best case scenario as well, and AMD is no stranger to that. Case in point: Boasting about Cinebench scores specifically because it doesn't care about memory latencies.

But what AMD had to show for FSR's brilliance was 1080p live streamed Youtube footage where the different modes looked barely different. This is much better.

We will never get a preview which would resemble an independent review in honesty from corporations, marketers will never talk about elephant in the room.Quote
Reply