Remember to plug in your 12VHPWR cables fully

After what feels like months of silence on the matter, reports of 12VHPWR cable problems are back on the agenda, this time affecting a custom 12VHPWR cable from CableMod.

In this case, a user of an RTX 4090 graphics card failed to fully seat their CableMod 12VHPWR cable, resulting in thermal strain within the compact connector. When the RTX 4090 user reported his issues on Reddit, CableMod quickly responded and promised to make things right with the user. Thankfully, the Redditor's RTX 4090 is undamaged, and CableMod has already offered to replace the user's burnt 12VHPWR cable.

In a post on Twitter, a CableMod representative has confirmed that their "cable wasn't plugged in properly in this case" and that this instance of cable burning is a "one off". Based on this information, we can assume that this user's 12VHPWR cable would not have been damaged if it was properly inserted. 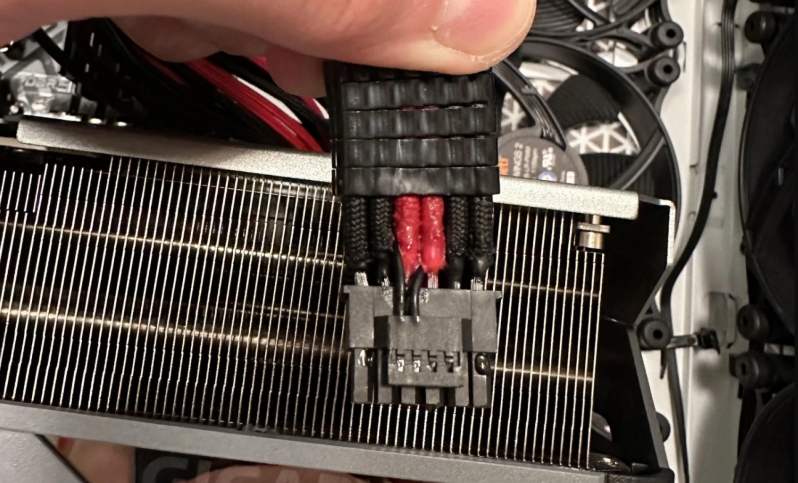 Back in November Nvidia confirmed that RTX 4090 cable burning issues were only occurring in instances where users did not fully seat their 12VHPWR cables into their graphics cards. This has turned out to be the case with today's reports of CableMod cable burn, revealing that even premium 12VHPWR cables can be affected by this issue.

Overall, CableMod has responded well to this instance of cable burning, offering support to the user quickly while confirming that the issue is due to user error and not the quality of their cables. What PC gamers should learn from this incident is that they should make sure that their 12VHPWR cables are fully seated to avoid any problems.

You can join the discussion on CableMod's 12VHPWR cables on the OC3D Forums.

KingNosser
Cant get it in these days that's what she said.

I mean really it seems to kinda be common to get attention, to me as low numbers as it is it does imho seem to be badly designed why does it need to be so small and just what was wrong with the standard 8pins in the first place at least they were at the end of the card and not slap bang in the middle like a huge OCD for everyone that has seen it.Quote

Dawelio
Quote:
Its usually in the middle due to the PCB not being that long.Quote
Reply