Micron reveals GDDR6X memory with up to 21 Gbps speeds

Micron reveals GDDR6X memory with up to 21 Gbps speeds

GDDR6X memory has been a long-rumoured addition to Nvidia's Ampere gaming product line, offering significant increases to memory speeds over today's GDDR6 modules. Now, Micron has officially confirmed the existence of GDDR6X and the speeds at which the new memory standard will operate at. 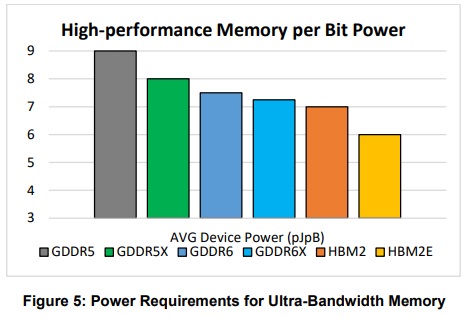 In the charge below, Micron has revealed that its GDDR6X memory modules will operate at speeds of between 19 Gbps and 21 Gbps, exceeding the capabilities of today's fastest GDDR6 modules.

With a 384-bit memory bus on Micron's "Example" RTX 3090 graphics card with a 12GB frame budder, memory bandwidth levels of 1008GB/s could be achieved. This bandwidth increase should surely meet the needs of Nvidia's next-generation Ampere GPUs, easily outpacing the company's RTX 2080 Ti.

With Micron calling its RTX 3090 listing an "example" application type, Nvidia's RTX 3090 should not be considered the "confirmed" name of Nvidia's upcoming gaming flagship. Neither should its 12GB frame buffer be considered a certainty.

Nvidia is due to reveal its next generation graphics hardware on September 1st, revealing what could be the company's RTX 30 series of products.

You can join the discussion on Micron's GDDR6X memory on the OC3D Forums.

AngryGoldfish
It's unusual that they managed to keep this tightly under wraps. We're only a month away from Micron's biggest use case for the new memory modules and it's only just been confirmed now. A lot of us didn't believe the rumours because there was no other word that it was feasible to increase the speeds by so much over GDDR6, which hasn't been out that long.Quote

Dicehunter
Quote:
The 2080 Ti which has GDDR6, In a little over 1 month came out nearly 2 years ago so we are due a nice memory bump