This is next-level GPU modding!

Nvidia's RTX 2070 graphics card is only available with 8GB of GDDR6 memory, offering ample memory for most gaming applications at launch. That said, there will always be those that will demand more VRAM, especially those who utilise their graphics cards for heavy video editing and workstation use cases.

Nvidia doesn't make RTX 2070 GPUs with more than 8GB of memory, but could a 16GB model be created with the right DRAM chips? That's what VIK-on put to the test with this RTX 2070, after discovering a leaked PCB diagram for the graphics card.

The DRAM for this project was purchased on AliExpress for $200 (US), making this project expensive. That said, the only consumer-grade Nvidia Geforce graphics card that currently offers gamers more than 12GB of memory is the RTX 3090, which features 24GB of GDDR6X memory and costs over £1,450 in the UK (when its in stock...).

After the graphics card had its RAM replaced, the GPU was unable to pass FurMark's stability test, though the GPU could complete a few runs of 3DMARK, as seen in the video below. While VIK-on has created a 16GB RTX 2070 graphics card, the GPU's lack of stability makes this project a failure. That said, getting a 16GB RTX 2070 GPU to boot is a success, even if the GPU is no longer fully functional.

You can join the discussion on VIK-on's custom 16GB RTX 2070 graphics card on the OC3D Forums. 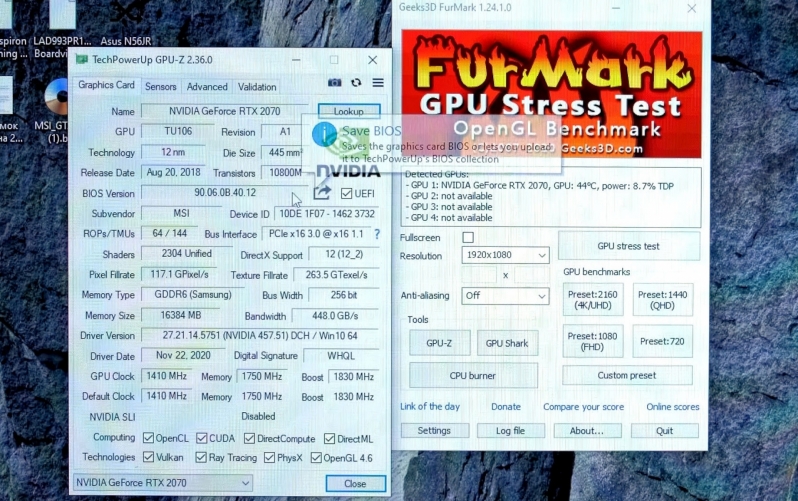 Kleptobot
Man, reworking BGA chips is a pita. Props to the bloke. I've always wondered about swapping chips around on gpus and motherboards, but never had enough desire to try it.Quote
Reply